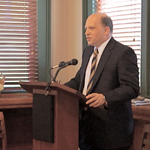 Andrew Orr is a specialist in modern military history. He received his B.A. from Claremont Mckenna College and his M.A. and Ph.D. from the University of Notre Dame. His work focuses on the 19th and 20th centuries and explores the boundaries of civilian and military identity. His first book, Women and the French Army 1914-1904, studied women’s roles in the French military and civil-military relations in France during the era of the world wars. Dr. Orr has published on intelligence operations in the Middle East, imperialism, civil-military relations, and the history of French Communist Party. His current projects include a book on French involvement in the Turkish War of Independence and a cultural history of the military in American life since 1973. He teaches classes in European history, American military history, and African history. Dr. Orr accepts history graduate students in European history, European and American military history, and security studies.

“‘Too Numerous to be Controlled’: Women, Professionalism, and Anti-Republicanism in the French Army, 1914-1928” French Historical Studies, Special Issue on France and the Great War, April 2016.

“‘We Call You to Holy War’: Mustafa Kemal, Communism, and Germany in French Intelligence Nightmares, 1919-1923” Journal of Military History, October 2011.

“‘The Consequences Would Certainly be Fatal’: Voting Rights and the French Army 1920-1928” Proceedingsof the Western Society for French History Vol 39,(Published Jan 2014)