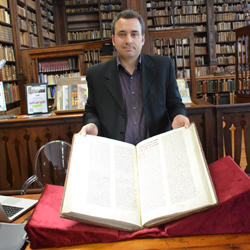 My research focuses on culture and communal dynamics in early medieval Europe. I began my career studying the collective identity embodied in the eleventh-century cult of the saints at the small Flemish abbey of Saint-Winnoc at Bergues (modern France). My first book, From Sithiu to Saint-Bertin, grew out of this initial research after I concluded that I could not tell Saint-Winnoc’s story without the context created by its mother abbey, Sithiu (located at modern Saint-Omer, France). Between roughly 650 and 1000, the monastic community at Sithiu repeatedly adapted the core elements of its collective memory. My book challenges the dominant “constructing-the-past” approach to collective memory by arguing that paradigms shared through allegories, rather than narratives related through histories, shaped early medieval communal culture. These paradigms evolved much more gradually than the narrative changes posited by the current consensus.

Currently, Brigitte Meijns (KU Leuven), Wim De Clercq (U Gent) and I are co-editing a volume of collected essays on the evidence for global networks in early medieval Flanders to be published with Amsterdam University Press. There has been much talk recently of a “Global Middle Ages” to signal an interest in the connections between western Europe and the rest of the world, rather than in the particularities that might have made “the West” different from other cultures. Flanders, with its extensive networks of rivers and Roman roads, its multi-lingual population and its position on the borders of French, German, English and Scandinavian communities stood at important cultural intersections in the North Atlantic world. The volume will survey the archaeological, social, economic and cultural evidence for Flemish ties to global networks and provide a basis for future research.

“Godeliph of Gistel and the Politics of Innocent Martyrdom in Eleventh-Century Flanders,” Hagiographica 15 (2008): 31-61