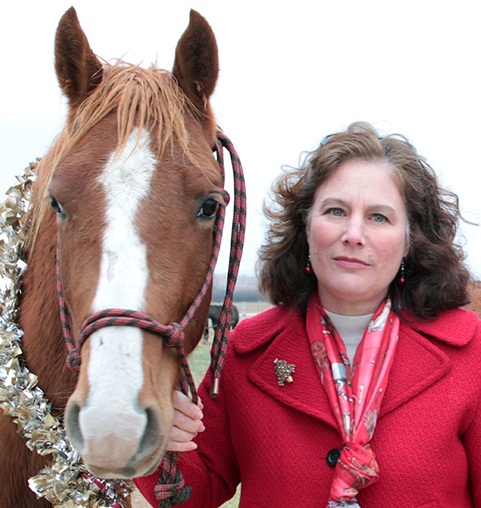 Bonnie Lynn-Sherow is an Associate Professor of American History, who primarily researches and teaches the environmental and agricultural history of North America with particular emphasis on North American Indians and minorities. She was the Executive Director of the Chapman Center for Rural Studies, the only undergraduate research lab in the Humanities and Social Sciences at K-State, from its founding in 2008 until her retirement from that position in August 2020. She is the author of Red Earth: Race and Agriculture in Oklahoma Territory (Lawrence: University Press of Kansas, 2004) which traces the different ways in which Euro-American, African-American and Kiowa communities shaped the agricultural ecology of Oklahoma Territory in the decades before statehood. Lynn-Sherow edited and wrote several essays for the 2013 Field Notes series (Volume VI) for the Symphony in the Flint Hills that focused on the history of Fort Riley in the Flint Hills. Lynn-Sherow has published numerous essays and book chapters in Agricultural and Environmental History and on the history of the 1862 Land Grant system. In 2013 she was commissioned by the United States Senate Historian to co-author an essay on the 1862 Morrill Land Grant Act in commemoration of President Abraham Lincoln’s administration which was included in a portfolio of commissioned essays in celebration of the second inauguration of President Barack Obama. Her current project, titled Indian in a Bottle, is a study of early-twentieth-century Americans' fascination with the Indian "Medicine Man" and how Indians' symbolic relationship to "nature" was used to peddle patent medicines. Future projects include a biography of a Southern Cheyenne family in the twentieth century. She is curator of a major exhibition of the work of the Chapman Center titled “Our Home: Yours and Mine” which opened September 2016 at the Flint Hills Discovery Center in Manhattan, Kansas.

Professor Lynn-Sherow served for several years on the board of the Natural Resources and Environmental Sciences Secondary Major at KSU. In 2007, Lynn-Sherow received a Canadian Consulate Professional Enhancement Grant for travel across Canada to gather materials for her class in Canadian History. In 2009, Lynn-Sherow was the recipient of a National Endowment for the Humanities Digital Humanities Award that launched the Chapman Center’s Lost Town Digital Archive (www.ksu.edu/history/chapman). Other successful grants include a Center for Engagement and Community Development award, a Digital Project grant from Brunswick Corporation (2011 and 2013) and a Digital History grant (Chronicling Kansas Cooperatives) from CHS Corporation in partnership with KSU’s Department of Agricultural Economics’ Arthur Capper Center (2013). Lynn-Sherow is active in several national societies and has served on the boards of the Kansas Association of Historians, the journal Kansas History: Journal of the Central Plains, member of the Editorial Board for the University Press of Kansas and the Agricultural History Society and was the city-appointed historian to Manhattan's Historic Resources Board from 2000 to 2009. Professor Lynn-Sherow received her PhD in American History from Northwestern University in 1998, an MA from Purdue University in 1992 and an undergraduate degree in Canadian History from the University of Windsor in Ontario, Canada.

With Jim Sherow, Lynn-Sherow has restored five historic homes in Manhattan, written and consulted on a score of national register nominations and on numerous historic preservation projects. She is the parent of four daughters and caretaker of two horses, two dogs and approximately six laying hens. With her retirement from the Executive Director position, Lynn-Sherow returns to her academic home in the Department of History on phased retirement through the spring of 2022. She and husband Jim are retiring to her native Canada to make their home in Campbell River on Vancouver Island.