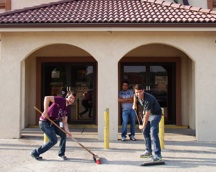 Carl Conway, a junior in English, hopes to use his degree to enter the television and film writing industry, and eventually into directing. From the beginning of his internship experience, Carl proved how initiative could provide him with meaningful knowledge and skills. He interned during the Summer of 2012 as a production assistant for Kick Me, an independent film directed by Gary Huggins (watch the trailer). After finding the movie, Carl auditioned for a role but realized from the character descriptions that he did not fit any of them. Thus, he took initiative and offered the director his availability for assisting in any way possible. From that, Huggins hired him on as an intern. Tanya González, Carl’s internship supervisor, says, “[His] story so clearly illustrates why internships are so powerful; if you’re thinking about a career, going out there and trying it on for size, to see if it’s the right fit, is such an advantage.” English majors have the ability to imagine themselves into any kind of career, just as Carl did with this internship.

Through the course of his internship, Carl conducted duties such as calling the extras and informing them of their filming schedule, providing moral support, and moving equipment. As the summer progressed, the director noticed Carl’s strong work ethic and gave him opportunities to be an Assistant Casting Director and Assistant Director. From the experience, Carl says, “I just gained a full breadth of knowledge of what it’s going to take to create a film; I will have to, no matter what, start in [the independent film] environment, so I got to learn exactly what kind of planning I’ll need to do.” In addition, the internship provided him with a better understanding of writing in terms of the form and content of cinema and how a written scene dictates filming. Ultimately, the internship has changed Carl’s perspective for how he imagines himself going forward in his future career.