Student studies how behavior and the brain can increase self-control 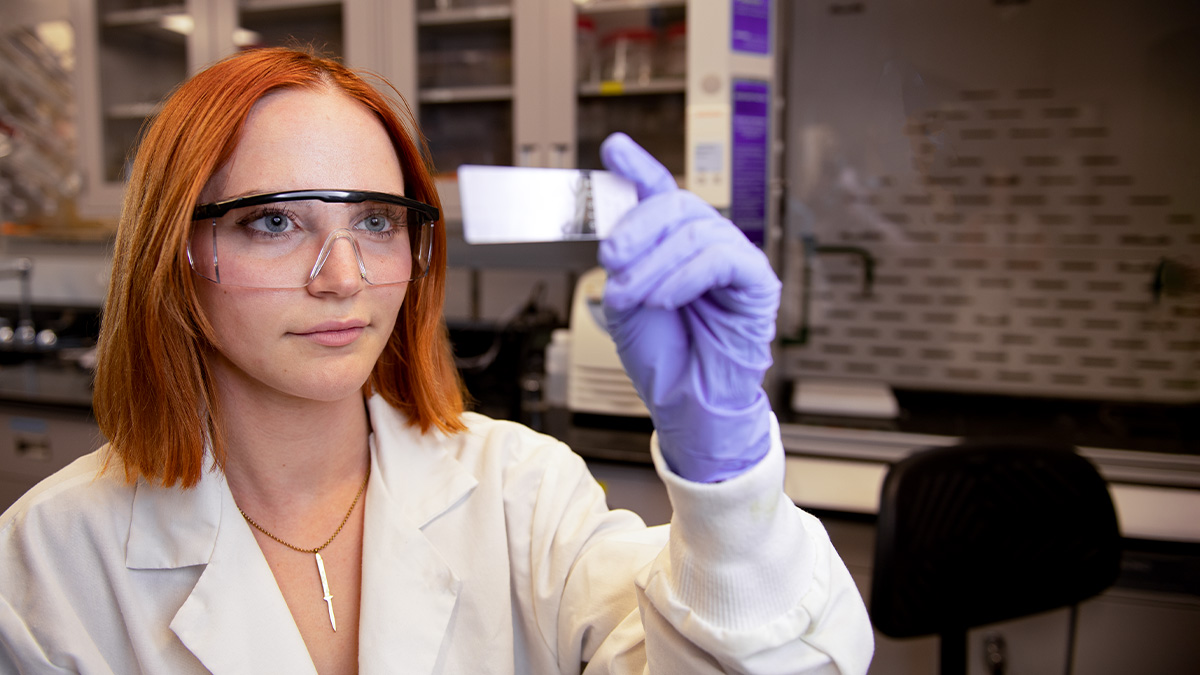 Lexe West has found a passion for researching self-control within the brain.

Learn more about the Reward, Timing and Decision Laboratory.

Studying psychology was never part of Lexe West’s college plan, let alone conducting research. But her plan quickly changed after applying on a whim for an undergraduate research assistant position in a Kansas State University laboratory that would help her find her true passion: the brain.

During her sophomore year, West started her research journey in the Reward, Timing and Decision Laboratory — led by Kimberly Kirkpatrick, university distinguished professor of psychological sciences — and studied how diet affects impulsive choices in rats. She soon discovered her interest was not in the dieting aspect, but instead in the neurobiology behind the decision-making and how it can advance self-control. “The fact that we could actually change behavior and see changes in the brains is what really interested me,” said West, now a junior studying psychological sciences in the College of Arts and Sciences.

Today, West’s research focuses on the behavioral techniques for impulsive decision-making and what can increase the rat’s self-control. She has received a Barry M. Goldwater Scholarship for her research and has been involved in the McNair Scholars Program at K-State.

“The rats are exposed to time intervals where they have to wait to receive the reward, and over time they become more likely to make a more optimal choice,” West said.

In practice, this looks like the rat having two options: a left lever and a right lever. If the rat chooses the right lever, it must wait 15 seconds before receiving one pellet of food. If it chooses the left lever, it must wait 30 seconds before receiving two pellets of food. Over time, as the rat is more frequently exposed to the intervention, it becomes more likely to press the left lever to receive more pellets. The process increases the rat’s self-control because it becomes aware of the options and learns the timing.

“Impulsive choice is a trans-disease process that is a risk factor for many diseases and disorders, including substance use disorder, gambling, obesity and attention-deficit/hyperactivity disorder,” Kirkpatrick said. “The interventions that we have developed have the potential to reduce risks for disease development as preventative therapies and could also be used in treatment settings.”

West plans to continue her research, especially its connections to the neurobiology of Parkinson’s disease. But whatever her future may hold, she knows one thing is certain: She would not have made the connections and discoveries she did without taking a chance and joining the laboratory.

“It’s amazing,” West said. “In my lab, I’ve been able to find a community that I really didn’t think I had before.”