We are pleased to present the 2008 Phi Kappa Meritorious Service Award to
Professor Fred J. Fairchild. 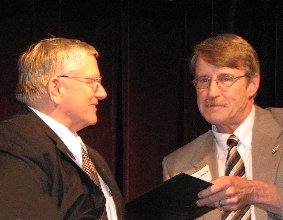 Professor Fairchild is a Professor in the Department of Grain Science and Industry.  He got his degrees at Kansas State University.  He joined the department in 1995 after having spent 30 years previously in industry helping to design, construct, and manage feed, flour, and dry corn milling facilities.  He also aided in the design and construction of grain storage, seed cleaning, and pet food plants.  He was project engineer for a $30 million state-of-the-art dry pet food facility.

At Kansas State University Professor Fairchild teaches four different courses in Grain Science.  He has written extensively on manufacturing feed and pet food and the technology of pelleting.  He has been Teaching Coordinator for his department.  He is Feed Milling Specialist for the International Grains Program.

His service to Phi Kappa Phi, in particular, and to the university, in general, is unparalleled.  He has been president-elect, president, and now past-president of Phi Kappa Phi.  His enthusiastic participation in the activities of the organization, his advocacy for it, and his service to advance its goals led to his election as president.

He has been president of Gamma Sigma Delta, the honorary agricultural society.  He has served on numerous faculty senate committees, and this coming academic year he takes over as Faculty Senate President.  He serves on the Provost's Department of Civil Engineering Advisory Committee; the Provost's IT (Intellectual Technology) Focus Group; and the Provost's Entrepreneurial Task Force Committee.  He serves on the Hale Library Electronic Catalog Committee.  He has been advisor to Alpha Zeta and to the Agricultural Student Council.

He not only has given much service to the university, but also to his department.  He was Project Manager for the design and construction of the new five-building $65 million Department of Grain Science Complex north of the university.  Two buildings were completed in 2004, and the third one was completed in 2007.

Professor Fairchild carries 'the love of learning' with him.  This quality brought him the honor of being selected as 'Teacher Fellow' of the North American Colleges of Teachers of Agriculture, a much coveted award.