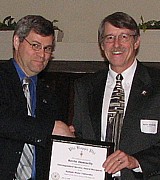 Dr. Donnelly is the Corresponding Secretary to our Phi Kappa Phi chapter.   This is a service that he has given our chapter since 2003.   In 2002, he was chosen to be the President of our Chapter.

Dr. Donnelly is the person who keeps our organization going.  Twice each year he voluntarily works countless hours to identify the candidates for initiation.  This involves screening the lists of thousands of students to determine those that qualify for Phi Kappa Phi membership.  He prepares their initiation packets, sends them their invitation letters, communicates with the other chapter officers and committee chairs to keep them informed, and makes the initiation process successful.  Our Phi Kappa Phi chapter is strengthened because of his outstanding organizational and leadership abilities.

He keeps in touch with the national office and communicates the important news from it.  He recently attended the National Phi Kappa Phi meeting and represented Kansas State University admirably.

Dr. Donnelly has received national distinctions.  He is the recipient of the American Society of Agronomy Agronomic Resident Education Award in 1993, the highest honor a professor can receive in agronomy.  He won the North American Colleges and Teachers of Agriculture Distinguished Educator Award in 2008, another highly competitive award.

The hours of service that Dr. Donnelly gives to our organization show his "love of learning" and desire to make sure that the outstanding students get the recognition that they deserve.  Phi Kappa Phi is honored to present the 2009 Phi Kappa Phi Meritorious Service Award to Dr. Donnelly.