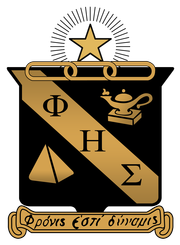 Phi Eta Sigma National Honor Society, founded on March 22, 1923, to encourage and reward academic excellence in the first year of collegiate study, is the nation's oldest and largest honor society for first-year college and university students in all disciplines and is the third most senior member of the Association of College Honor Societies.  Each year, Phi Eta Sigma awards more than $300,000 in scholarships to its members nationwide. The three Greek words appearing at the bottom of the crest, right, form the motto, "Knowledge is Power."

Although the primary focus of Phi Eta Sigma is to recognize and celebrate scholastic achievement, its secondary focus is service to the community. Therefore, the members of the K-State chapter volunteer and organize a number of service projects throughout the year.  Our most recent commitments have been to the Douglass Community Center to provide volunteer tutors for their Hand to Hand after-school program, Second Helping to serve community dinners and bell ringing for the Salvation Army at Christmas time. In addition, Phi Eta Sigma forms a Relay for Life team each year and recently formed a partnership with the Johnson Cancer Research Center to raise awareness and to raise funds for cancer research taking place right here at Kansas State University.

Phi Eta Sigma has chartered chapters at 365 campuses across the country and since its founding, more than one million scholars have been inducted.

Monday, November 29 | 4:00 p.m. | Online: email us at phietasigma@ksu.edu for the video meeting link