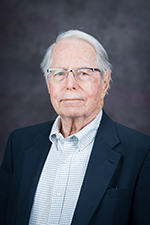 The story of Phi Beta Kappa at Kansas State University begins in 1924, when a group of local Phi Beta Kappa members here in Manhattan created an Association. This group of assorted alumni from many different institutions functioned informally until they were accorded official association status by the national office in 1938. They met to encourage liberal scholarship at K-State and awarded prizes for academic excellence – typically for $10, a sum equal to over $200 in today’s money. The Association could encourage students, but they could not elect them to membership in Phi Beta Kappa.

Following WWII the Association made efforts to get approval for a chapter. Weldon Crawford, Professor of Physics, was a leading advocate. Petitions were submitted to the national Phi Beta Kappa office, but none succeeded.

Even though President Milton Eisenhower (1943-1950) began emphasizing the importance of a liberal education, it was easy to believe that K-State was just an aggie school – hardly a candidate to be recognized for its excellence in the arts and sciences. After all, the name then was Kansas State University of Agriculture and Applied Science.

More than a decade later a group of faculty Phi Beta Kappans got together and prepared a petition to the United Chapters of Phi Beta Kappa setting forth a new case. The first step was to be plausible enough to get approval for a site visit, and it wasn’t long before a place on the visitors’ schedule was won.

Anna Brummett, Professor of Biology at Michigan, and Hallett Smith, Professor of English at Cal Tech, arrived to spend two days on campus with faculty members and students. At the time, they were properly noncommittal about their impressions but expressed gracious thanks for the university’s hospitality.

The next step was for them to present their recommendation to the thirtieth Triennial Council, the senators comprising the governing body of Phi Beta Kappa. It met at Vanderbilt University on August 7, 1973, where Chancellor Alexander Heard welcomed delegates as part of the 100th anniversary celebration of that university’s founding. Professors Brummett and Smith made their presentation -- it was glowing, and approval was prompt and unanimous. They had been absolutely stunned by the intelligence, fluency, and broad knowledge of the students with whom they had met in the director’s conference room in the Student Union. It’s fair to say that it was the students who made this chapter a reality.

In the end, K-State’s case was unusually convincing, as the Committee on Qualifications had recommended 25 institutions – but only eight new chapters were approved then. This all seems a long time ago, and it was fitting that K-State’s time had come to join the ranks of American universities with the top scholastic honorary. K-State has preceded a number of other major universities in gaining a Phi Beta Kappa chapter. Although Iowa State, Colorado State, and Arizona State were chartered the year before, many top schools came later – Virginia Tech 1977, North Carolina State 1995, Texas A&M 2004, and Texas Tech 2006. Oklahoma State University gained its charter in 2013.

So...the Beta of Kansas was christened in 1974, and it was time for the installation of the chapter. The festivities were held in All Faiths Chapel followed by a dinner in the Union’s Bluemont Room. President McCain and Earle Davis, Head of the English Department, were named as founding members, and there were 35 charter members. Bob Kruh became the first president, and Carol Oukrop secretary-treasurer.

The main program item in the installation was an address by J. D. Williams, Professor of Political Science at the University of Utah and a Phi Beta Kappa senator. He spoke of a university’s responsibility to foster learning, understanding, and reason – to welcome different ideas in the quest for truth, to gain a useful skepticism, and to become a productive citizen.

For the occasion, the new chapter welcomed Phi Beta Kappa representatives from the Alpha of Kansas at the University of Kansas (the oldest chapter west of the Mississippi, 1890) – including the chapter president and the dean of the college of arts and sciences. In her congratulatory letter, President Alexandra Mason graciously urged that we “enjoy as rewarding a voyage with the love of wisdom as pilot of our ship of learning as we have – and may our common course run over smooth seas, following the three stars of literature, morality, and friendship.”

The early days required the adoption of a constitution and bylaws. These documents are essentially the boiler plate prescribed by the national office. A list of criteria for election was drawn up. These have always specified a mix of the humanities, sciences, mathematics, and modern language, with a required minimum number of credits of upper division work. Those elected are indeed a very select, much accomplished group – only about 50 out of a usual 3,500 bachelors’ degrees awarded annually.

With the installation beginning to fade from memory it was soon time for the charter members to assemble and choose the first class of Phi Beta Kappans. This took much work, going over transcripts, checking not only GPAs but validating the breadth and level of coursework -- a task that has since become easier with the aid of computerized searches.

On April 10, 1974, the first class of 24 was initiated. The first member was Elaine Beckman, a student in the then College of Home Economics. She received special recognition at the spring initiation banquet in 2013 celebrating the twentieth such event. In her remarks, she inspired the new Phi Beta Kappans with the story of a career reflecting prodigious achievement validating the benefit of a broad, liberal education. Elaine has a special distinction in our history but, sadly, is no longer living.

Elaine’s is the first signature in the roll book which each initiate signs at the time of induction. Further special distinction attaches to the signatures of President Jimmy Carter and the premier American composer Aaron Copland, whom the chapter elected to honorary membership.

The chapter has come a long way, and it’s surprising to step back and realize that the origins of the Beta of Kansas lie in such a now distant past. Through 2016 the Chapter has elected over 1,500 to membership, including 20 honorary and alumni members. There are many stories to tell – and much more is to come, continuing the distinguished tradition of Phi Beta Kappa!