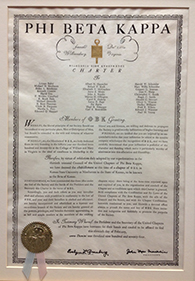 Phi Beta Kappa is the nation’s oldest and most prestigious academic honor society and has more than 500,000 members. Since its founding at the College of William and Mary in Williamsburg, Virginia in 1776, the Society has fostered and recognized excellence in the liberal arts and sciences, and its gold key is widely recognized as a symbol of academic distinction.

Thirty-five resident faculty members chartered Beta of Kansas, the K-State chapter of Phi Beta Kappa, on February 11, 1974. That first year, 24 students were elected to membership. The chapter continues to recognize excellence in the liberal arts and sciences with election each spring of juniors and seniors who demonstrate scholarly achievement, good character, and broad cultural interests.

Students elected to Phi Beta Kappa have shown themselves devoted to intellectual pursuits and to the objectives of a liberal education - not merely knowledge but also breadth of interest, depth of understanding, and respect for a diversity of informed opinion. There are fewer than 300 chapters of Phi Beta Kappa nationally (only about 10% of institutions of higher learning have chapters), with just two chapters in the state of Kansas.

According to the society, 17 U.S. Presidents, 39 former or current U.S. Supreme Court Justices and more than 130 Nobel laureates are members of Phi Beta Kappa.

The gold key is widely recognized as a symbol of academic achievement. The letters ΦBK are the initials of the Greek Motto, Philosophiae Biou Kubernetes, meaning "Philosophy [the love of learning] is the Guide of Life." The three stars represent the original principles of the Society: friendship, morality, learning. The key today looks much as it did at the society's inception in 1776.

Students are elected to membership in Phi Beta Kappa on the basis of broad cultural interests, scholarly achievement and good character.

One does not apply for membership in Phi Beta Kappa. There is no entitlement to membership; members are selected at the sole discretion of the Members-in-Course Committee. New members are selected after a careful review of the academic records of each eligible junior and senior. Students must have a GPA of 3.7; students with a GPA between 3.6 and 3.7 may be considered if the level and depth of coursework indicate an unusually distinguished record.

Students must also have:

Not all courses in departments within the College of Arts & Sciences count toward these requirements; students with questions should contact one of the chapter officers.

The standing membership of the Chapter consists primarily of Faculty and Staff of Kansas State University who were elected to the Phi Beta Kappa Society at the college or university where they earned their undergraduate degree and who have registered as members of the Beta Chapter of Kansas. It also includes Honorary and Alumni members inducted by the Chapter. Others who have been inducted here or elsewhere to the Phi Beta Kappa Society may be admitted to membership in the Beta Chapter of Kansas by requesting to transfer their membership to the Chapter.

Members-in-course are inducted into the Phi Beta Kappa Society annually at the Chapter's spring meeting (April or May).

The principal activity is the election of new members, called Members-in-Course, which happens each spring semester.

The Dudley Williams Sophomore Book Prize, is awarded each spring to no more than three sophomore students whose academic record shows promise in meeting the ideals of Phi Beta Kappa. The prize is named in honor of Dudley Williams, KSU Emeritus Professor of Physics and a founding member of the Beta of Kansas Chapter.

Occasionally, the chapter will elect Honorary and/or Alumni members.

The chapter also sponsors occasional public lectures. This spring, we are excited to welcome Dr. Rigoberto Hernandez to campus as a Visiting Scholar. 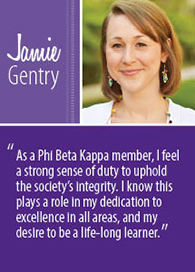