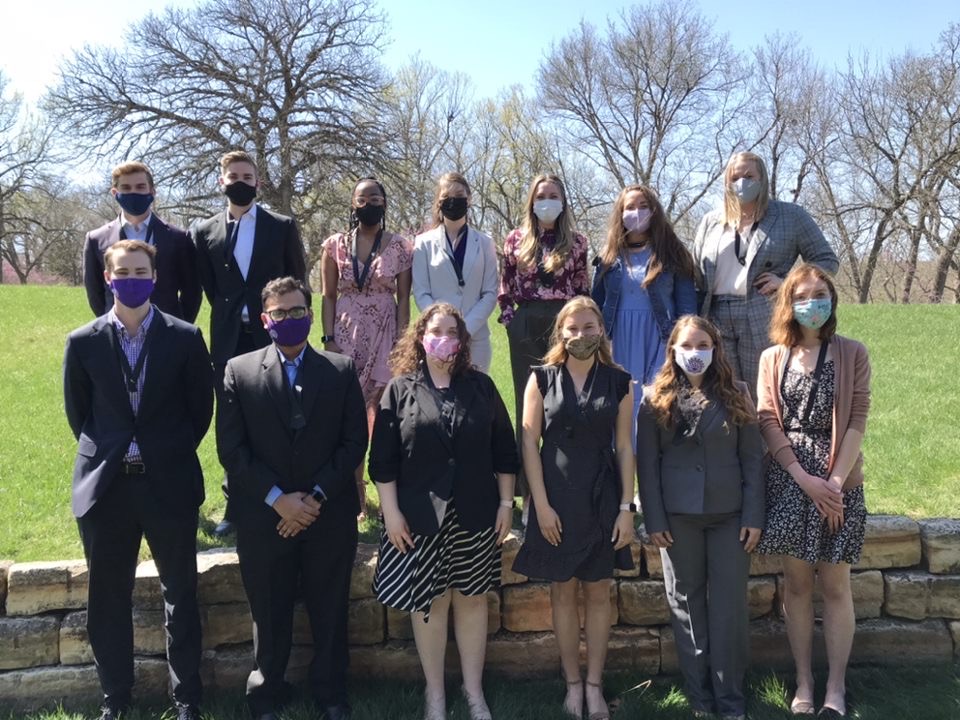 ABOUT THE XIX CHAPTER

The K-State chapter was originally known as the XIX senior honorary for women. Organized in 1914, XIX was renamed Mortar Board in 1928 upon affiliation with the national organization. The flower of XIX was the daisy, and the color was yellow. This honorary emphasized leadership, scholarship, and constructive cooperation. XIX alumnae joined the ranks of Mortar Board alumni in 1930.

In 1945, newly tapped members of Mortar Board wore gold tassels to show their membership. In the 1960's, they wore mortar boards to class the day after tapping.

In 1967, Mortar Board changed its uniform from black skirts and white blazers to navy shirts and yellow shells. In the 1970's, grey shirts became the standard, and black suits became the norm in the early 1990s. In 1968, Mortar Board sold a booklet listing all campus events. Similar to the Programmer of today, the Mortar Board version sold for $1.

After Mortar board voted to allow men, the K-State chapter tapped three for the 1976-77 school year. They were David Cink, Stephen Hoffman, and Guy Seiler.

The chapter at K-State was recognized as a Chapter of Excellence several times since 1991-92. In 1996, it was named one of the first five Chapters of Distinction in Mortar Board history.

In 1999, Mortar Board began a project entitled reading is leading. As part of this project, Mortar Board Members read stories and donate books to local schools and daycares.

In 2000, Mortar Board created and sold a booklet designed to help freshmen become better oriented with Kansas State University and the Manhattan community. The booklet contained quotes and stories from current members about their experiences as students on the KSU campus.

Today, the XIX chapter continues its rich tradition of promoting scholarship, leadership, and service at Kansas State University and is a leading Mortar Board chapter, earning the Golden Torch award for Excellence the past 8 years.

1928 - XIX becomes a chapter of Mortar Board Senior Honor Society

1999 - K-State Mortar Board begins its "Reading is Leading" initiative

2014 - The XIX chapter continues to promote excellence in scholarship, leadership, and service at K-State, winning the Golden Torch award for excellence for the 8th straight year

Marianna Kistler-Beech, for whom K-State's art museum is named;