Much of our current knowledge of the insect immune system was shaped by powerful genetic studies in Drosophila melanogaster, and by data obtained from a few Lepidopteran species, such as Manduca sexta, where the large size of the animal made biochemical studies feasible. Bacterial and fungal infections are fended off using a well-conserved innate immune system, which relies on both cellular and humoral reactions. Upon recognition of microbial patterns, signal transduction pathways and /or protease cascades are initiated, which activate a number of downstream immune reactions (see figure). These include (i) the REL1/REL2 pathways - orthologous to the Toll and Imd pathways - leading to production of antimicrobial peptides and many other immune factors , (ii) activation of phenol-oxidases resulting in melanin production, and (iii) activation of thioester proteins as part of the complement pathway. At least four tissues contribute to immune responses against malaria parasites, including fat body, hemocytes, and salivary gland and midgut epithelia. Additionally, malaria parasites face local epithelial responses, which for the most part are not well understood. 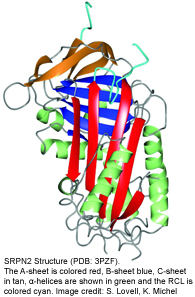 Serpins are the largest family of serine protease inhibitors and are found in all higher eukaryotes as well as bacteria and viruses. Serpins are considered the most important protease inhibitor family in higher eukaryotes, and hold a wide range of biological functions. In insects, serpins control different branches of the innate immune system, including melanization and the Toll pathway.

Serpins are structurally conserved suicide substrates. The active site of the serpin is the reactive center loop (RCL) that hovers above the main protein core (see figure on the left). The RCL binds to the active site of the specific target proteinase similar to the binding of a substrate. The protease cleaves the serpin at the so-called scissile bond (designated P1-P1’). This cleavage initiates a very large intramolecular movement within the serpin, as the RCL inserts into the center of the molecule. As the consequence, the active center of the protease is distorted, the serpin becomes covalently linked to the protease, and both proteins are irreversibly inhibited.

We want to understand how serpins regulate the innate immune responses in mosquitoes and how this regulation affects malaria parasite transmission. We have several projects on mosquito serpin biology ongoing in the laboratory: 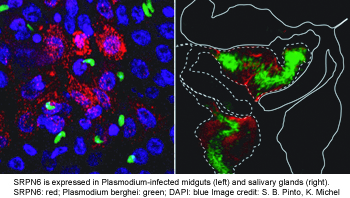 glands (see figure on the right). This serpin hinders parasite passage by either contributing to the complement system and/or melanization. We are currently determining its protease targets using in vitro and ex vivo approaches. Additionally, we are investigating its promoter region for infection-responsive regulatory elements.

SRPN2 is the key inhibitor of melanization in mosquitoes 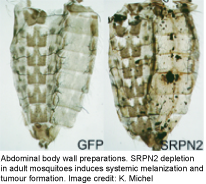 Melanization is a prominent innate immune response in arthropods that encapsulates and kills invading microorganisms or pathogens. One of its rate-limiting steps is the activation of prophenoloxidase (PPO), which is controlled by an extracellular proteinase cascade and serpin inhibitors. The molecular composition of this system is largely unknown in mosquitoes. Many years ago, we determined SRPN2 to be a key negative regulator of PO activation (see figure on the left). Since then we have been using SRPN2 to identify the proteases tha tare required for PO activation in mosquitoes, using biochemical and reverse genetics approaches. We have shown SRPN2/CLIPB9 and SRPN2/CLIPB10 to constitute parallel regulatory units that control melanization in mosquitoes. We are further exploring the protease network upstream of this CLIPB proteases using a variety of methods including classical biochemical approaches.

The cellular arm of the mosquito immune system is represented by hemocytes, which are the insect’s equivalent to the myeloblast lineage of blood cells. These cells perform phagocytosis and encapsulation, produce free radicals of nitrogen and oxygen, and express the majority of molecules in the melanization and complement-like pathways. In addition, studies by several laboratories suggest hemocytes are recruited to the midgut and dorsal vessel during Plasmodium sp. infection, and may mediate innate “immune memory”. However, despite the multi-facetted contribution of mosquito hemocytes to immunity against malaria parasites, little is known about their basic biology. To overcome this bottleneck, we are establishing a number of robust experimental tools to study hemocytes ex vivo.

Using these tools, we have established that the physiological event of a blood meal causes

critical changes in An. gambiae hemocytes. Hemocytes increase in numbers due to cell proliferation, and several highly conserved immune cell activation markers are detectable in hemocytes isolated from female mosquitoes within a day after blood feeding. In addition, we found up-regulation of immune factors critical for the complement-like pathway and the melanization response demonstrating that a blood meal activates the immune response in mosquitoes. This suggests that the mosquito’s immune system is primed to act against a broad range of putative pathogens which may be encountered in a blood meal.