Marlin Fitzwater, who served as assistant to the president and press secretary for Ronald Reagan from 1987 to 1989 and for George H. W. Bush from 1989 to 1993, will be honored at Kansas State University's Graduate School commencement at 1 p.m. Friday, Dec. 11, in Bramlage Coliseum. He also will serve as the commencement speaker for the ceremony.

Fitzwater grew up on a small farm near Abilene, Kansas. In 1965, he earned his bachelor's degree in journalism from Kansas State University. While attending Kansas State University, Fitzwater worked on five newspapers: Manhattan Mercury, Topeka Capital-Journal, Abilene Reflector, Lindsborg News-Record and the Collegian, the university's student newspaper. In 1965, Fitzwater was named the Outstanding Male Journalism Graduate.

Fitzwater worked for several federal agencies in Washington, D.C., severing as director of press relations for the Environmental Protection Agency and deputy assistant secretary of the U.S. Department of the Treasury. Beginning in 1983, he served in the White House for a decade as an assistant to Presidents Reagan and Bush.

As the only press secretary in history to be appointed by two U.S. presidents, Fitzwater gave more than 850 press briefings in six years, earning praise from the news media and the public for his honesty and humor. For millions of Americans, he was recognized as a calm and knowledgeable voice for the American government through two recessions and eight military conflicts, as well as the voice of the 26-nation coalition in the Persian Gulf War to liberate Kuwait.

In 2002, Fitzwater founded the Marlin Fitzwater Center for Communication at Franklin Pierce University in New Hampshire. He was a writer/consultant for the television show "The West Wing" and wrote a stage play about the Bush and Gorbachev Cold War diplomacy. He also authored several books, including "Call the Briefing," a memoir of his White House years, and "Esther's Pillow," about a small town in Kansas.

Fitzwater's presidential papers now are part of the Reagan and Bush Presidential Libraries, and his personal papers are housed in the Morse Department of Special Collections at Kansas State University's Hale Library.

Fitzwater and his wife, Melinda, live near the Chesapeake Bay in Deale, Maryland. 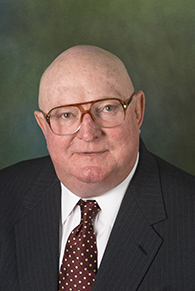 Kansas State University alumnus Marlin Fitzwater will receive an honorary doctorate from the university at the Graduate School commencement at 1 p.m. Friday, Dec. 11, in Bramlage Coliseum.