Marshall scholarships are awarded to about 40 students each year. The scholarship provides full funding for one or two years of study in the U.K., which Thomas will use for a master's degree at the University of Oxford.

"Jordan Thomas is an ideal Marshall scholar and worthy of this prestigious honor," said Kirk Schulz, Kansas State University president. "Jordan is inspired to learn and has shown real leadership while contributing to the advancement of knowledge in the social sciences. The university strives to empower students like Jordan in a participatory culture of learning to create an exceptional undergraduate experience — a pillar of becoming a Top 50 public research university by 2025."

The Marshall Scholarship looks for individuals who have the potential to excel as scholars, leaders and ambassadors between the U.S. and U.K. Jim Hohenbary, director of Kansas State University's Office of Nationally Competitive Scholarships, says Thomas has demonstrated all three as an undergraduate student.

"I admire Jordan's ability to step outside his comfort zone in order to explore his world, gain new perspectives and cultivate his goals," Hohenbary said. "Jordan has repeatedly engaged with new and unfamiliar communities during his time at K-State. This proven ability to make scholarly and personal connections will allow him to build many constructive relationships while studying in the U.K. and beyond."

Thomas has traveled extensively and experienced many cultures as part of his anthropological study and research. In spring 2015, he lived in Kansas City to assist residents with the development of an urban farm, and he bicycled and hitchhiked his way from Kansas to Colombia in 2014. During the spring 2014 semester, Thomas lived as a full-time resident in a retirement home to study the culture and customs of its residents. He co-produced a video "To Live in this World" about the experience and presented it at an international film festival in Paris. He also researched the correlation between social cohesion and labor productivity on a fruit farm in Costa Rica during summer 2013.

During summer 2015, he lived in Taos, New Mexico, to research the correlation between traditional agriculture and youth participation in language and ritual with the Taos Pueblo Native American community — a project that he calls his favorite.

"It feels like I'm on to something that really hasn't been explored that much in academia," Thomas said. "A lot of religious beliefs, cultural ceremonies and languages of indigenous groups are based around traditional agricultural practices. But for several generations the youth have been moving away from traditional agriculture and food production, causing the groups to lose this foundation for culture and language."

While in Taos, Thomas and another anthropology student helped the Taos County Economic Corporation renovate a greenhouse, refurbish fields, and plant corn and squash. They also helped community members maintain a 500-year-old irrigation system — during what Thomas describes as an irrigation party. Amid the physical labor, the students were able to conduct more than 20 hours of interviews with the community members and are working to make a short documentary about the community's history, culture, language and residents' pride in growing food.

Thomas will continue this type of research as part of his graduate degree in the U.K. He wants to focus on the environment and social sustainability with a particular interest in urban food systems.

"What I hope to look at is the social effects of food systems and increasing our understanding of them so we can capitalize and apply them in places where they will be needed," Thomas said. "As urbanization picks up, local populations need more food autonomy and food security."

At Kansas State University, he is the vice president for Wildcats for International Development, has served as secretary of Anthropology Club, is a member of Phi Beta Kappa Honors Society and Theta Xi fraternity and a past member of the Student Governing Association's Student Review Board.

He is a 2011 graduate of Maur Hill-Mount Academy in Atchison and the son of Ryan Thomas, Atchison, and Susan Biggs Thomas, Overland Park.

Kansas State University's anthropology program is part of the sociology, anthropology and social work department in the College of Arts & Sciences. 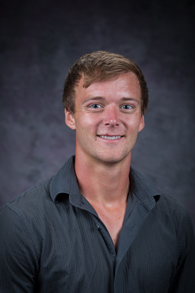