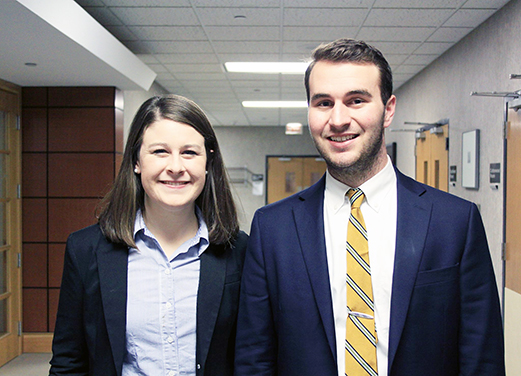 Van Ranken and Kennedy will take office April 7, when they will begin to advocate for the three initiatives of their campaign: mental wellness, diversity and political advocacy.

For the mental wellness platform, the student leaders seek to strengthen the relationship between the university's Counseling Services and Student Governing Association to de-stigmatize mental illness on campus and promote the programs of Counseling Services.

For diversity, Van Ranken and Kennedy want to work with university administration to provide cultural competency training for faculty and students. Also, they want to lead the Student Governing Association in fundraising for a multicultural student center.

"We want all students to feel that they are members of the K-State family," Van Ranken said. "We believe taking these action steps to become a more inclusive campus community will help us demonstrate that K-State values diversity."

For the pair's third campaign tenet — political advocacy — Van Ranken and Kennedy would like to create a nonpartisan advocacy organization, which they are calling Kansas Student Voice. It would partner with other colleges and universities to promote voter education and registration, as well as prioritization of higher education funding.

"I want to advocate for student success through these three platforms, as well as through any other initiative that students want us to support," Van Ranken said. "I truly want to represent students diligently and tirelessly, and I want to ensure that I follow through on the areas on which Trenton and I have campaigned."

When their term comes to an end next year, Kennedy said he hopes to look back on his work knowing he made difficult yet sensible choices and negotiated, advocated and served on behalf of his peers.

More information about Van Ranken's and Kennedy's plans and goals are available at www.vanrankenkennedy.com.

"We have a vision for K-State that is exceptional," Kennedy said. "I am ready to truly serve the student body."

"I truly want to represent students diligently and tirelessly, and I want to ensure that I follow through on the areas on which Trenton and I have campaigned."