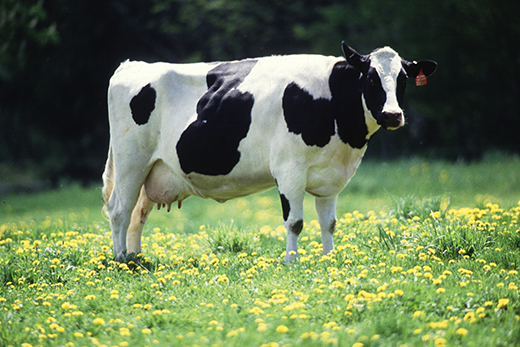 A test developed at Kansas State University is identifying mastitis in dairy cows earlier and for less cost than current technologies on the market. The test detects subclinical mastitis in dairy cows by screening a sample of a cow's milk for specific enzymes. Mastitis is the most common disease in U.S. dairy cattle and costs the U.S. dairy industry more than $2 billion annually in losses. | Download this photo. | Photo is courtesy of the U.S. Department of Agriculture.

MANHATTAN — Kansas and U.S. dairy producers may avoid some of the billions of dollars lost to mastitis thanks to a Kansas State University technology that is detecting the early stages of the disease in dairy cows.

Deryl Troyer, professor of anatomy and physiology, is leading a project with Stefan Bossmann, professor of chemistry, that uses nanotechnology to positively identify mastitis in dairy cattle earlier and costs less than current technologies on the market. Mastitis is a disease that inflames and eventually scars the udder tissue of dairy cows, reducing milk production and altering milk composition. It is the most common disease in U.S. dairy cattle and costs the U.S. dairy industry more than $2 billion annually in losses.

"The classical mastitis tests estimate the numbers, not the activity, of neutrophil cells, which are the dominant cells that travel to the inflamed udder during mastitis," Troyer said. "Many times early and emerging cases of mastitis are not caught by the tests because they count the numbers rather than the activity. These are often the most important cases to catch."

Early detection will help dairy producers better treat cows with emerging cases of mastitis as well as reduce transmission to other cows in the dairy operation.

The project uses the duo's nanoplatform technology that can quickly detect cancer cells and tumors before physical symptoms ever appear. Researchers say that the test easily translated to mastitis detection because several of the enzymes that cause inflammation in human cancers also cause inflammation in the udder of the dairy cows.

"We looked at about 30 enzymes and identified three that are highly indicative of mastitis," Bossmann said. "These three enzymes and this nanoplatform make it possible to detect preclinical mastitis cases that have high enzymatic activity but a low somatic cell count. These cases have previously been undiscoverable, so there is not a test on the market for this combination."

To test for mastitis, a sample of pasteurized milk is put into a buffer solution containing the enzyme-detecting nanoplatform. The nanoplatform consists of iron nanoparticles coated with amino acids and a fluorescent dye. The amino acids and dye interact with enzymes in the milk. The sample is incubated for up to 30 minutes and then examined for three enzymes that cause mastitis.

Recent tests in the Troyer and Bossmann laboratories have detected subclinical mastitis in less than five minutes.

Researchers say their mastitis test could be used today by large-scale dairies and eventually by robotic dairy facilities. Researchers hope to make the test a more viable option for individual and smallholder dairy operations through more development.

The project is being funded through the Kansas Department of Commerce, the Kansas Board of Regents and a Global Food Systems Innovation grant.