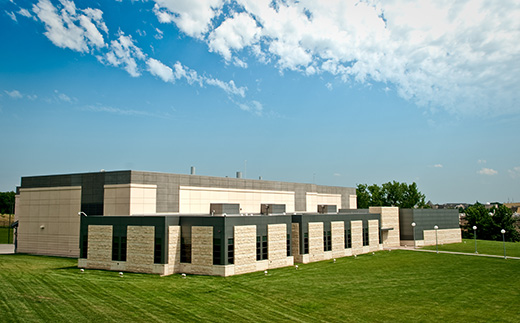 Kansas State University's Biosecurity Research Institute at Pat Roberts Hall is helping develop and transition several research projects for the National Bio and Agro-defense Facility. The BRI also is helping train NBAF's future workforce so that the lab can be fully operational by 2022 or 2023. | Download this photo.

MANHATTAN — Although the remaining funding for the National Bio and Agro-defense Facility, or NBAF, was recently finalized, work on the federal livestock research facility has continued to move forward in recent years — including Kansas State University conducting research that will help jump-start future operations at NBAF.

The university's Biosecurity Research Institute, or BRI, at Pat Roberts Hall is in the third year of a seven-year, $35 million grant from the state of Kansas. The funding supports the development and transition of several NBAF-centric research projects as well as training and workforce development.

Ongoing projects at the aging Plum Island Animal Disease Center will complement collaborative research at the BRI — a state-of-the-art biosafety level-3 and biosafety level-3 agriculture research lab. Moreover, the BRI will kick-start several research projects that cannot be conducted at Plum Island. The projects will eventually transition to NBAF once the federal lab becomes operational in 2022 or 2023.

"We really see that $35 million in research funding as a very positive aspect," said Ron Trewyn, the university's NBAF liaison. "It enables our faculty and scientists at the USDA's Arthropod-Borne Animal Disease Research Unit in Manhattan to be involved, move research forward and train the next generation of scientists."

"In terms of transition, we have to understand that there are a wide variety of pathogens out there — pathogens that we know about and, unfortunately, pathogens that we don't know about — that are a constant threat to agriculture in the United States," Higgs said. "Because of that, the U.S. cannot afford a period of time in which research at Plum Island is stopped and then NBAF is opened. It's not going to be an instantaneous thing like turning off one light switch and then turning on another one. The transition process has to phased, and with these state of Kansas funds, the BRI will help to ensure continuity of U.S. preparedness."

Of the eight diseases NBAF is proposed to study, research projects are approved in the BRI with the following four and are ongoing with the last two:

The BRI is the first nonfederal laboratory ever to receive federal approval to conduct research on African swine fever and classical swine fever. A collaborative project between Kansas State University and the Arthropod-Borne Animal Disease Research Unit at the BRI on wild-type Rift fever virus in livestock is believed to be the first such project in the U.S. since the late 1980s, Higgs said. In the last 20 years, such research had to be performed in foreign laboratories, even if supported by U.S. funds.

"The BRI, Plum Island's USDA researchers and the Department of Homeland Security are very engaged and working together closely during this time to ensure that the transfer of agents at each step on the transition process is a well-regulated, safe and secure process," Higgs said.

Additionally, Larry Barrett, director of the Plum Island Animal Disease Center and the recently appointed acting director of the Office of National Laboratories, visited the BRI in 2014 to discuss the transition process as well as research, education and training opportunities for Kansas State University, Manhattan Technical College and Cloud County Community College. These institutions and others will help Homeland Security develop NBAF's workforce.

In addition to research, the state's funding also has supported:
• Placing one of the university's veterinary medicine students at the Plum Island lab for three years and another at the Australian Animal Health Laboratory.
• Collaboration with Plum Island and high-containment laboratories in England and Germany.
• Developing a curriculum and academic credit course materials for education and training in biosafety, biosecurity and transboundary animal diseases, as well as supporting the College of Veterinary Medicine's Summer Undergraduate Research Program.

NBAF will be Homeland Security's premier foreign animal disease research lab. It will research high-consequence livestock diseases that threaten animal and human health. The $1.25 billion lab will be on the northeast edge of the Manhattan campus. When completed, NBAF is anticipated to have about 400 employees and generate $3.5 billion into the Kansas economy in the first 20 years of operation. NBAF is anticipated to begin operations in 2022 or 2023. Construction of the facility's central utility plant is more than 90 percent complete.