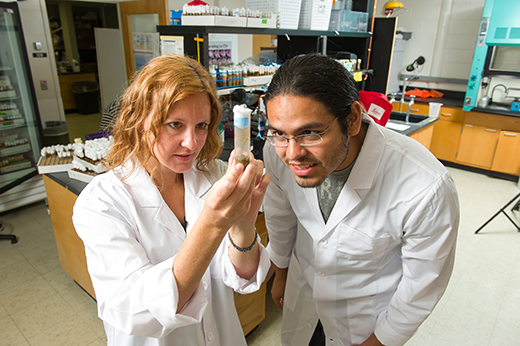 MANHATTAN — The fruit fly may help us be less clueless about human muscle development and Parkinson's disease.

Erika Geisbrecht, Kansas State University associate professor of biochemistry and molecular biophysics, is studying the fruit fly, or Drosophila melanogaster, to understand a gene called clueless, or clu. Geisbrecht and her research team have found a connection between clu and genes that cause Parkinson's disease.

Geisbrecht's team is among the first to focus on the connection between clu and mitochondrial function in fruit fly muscle cells. The researchers recently published their work in the journal Human Molecular Genetics.

"We are trying to understand how muscles develop and how healthy muscles are maintained throughout the entire life of a fruit fly in the hopes of applying this knowledge to the human body," Geisbrecht said.

Geisbrecht uses fruit fly muscles as a model for human muscles because of their similar structures — approximately 85 percent of the human disease genes have corresponding genes in the fruit fly. Fruit flies also have a short lifecycle of 10 days from when the egg is laid to when adults emerge, which allows for the rapid observation of muscle development and maintenance.

The connection between fruit fly and human muscles has made it possible to understand the role of the clu gene that — when mutated — causes defects in the localization and turnover of damaged mitochondria. A buildup of damaged mitochondria ultimately affects the ability of muscles and nerves to function properly. Geisbrecht and her team are just beginning to understand how clu interacts with a gene called parkin that — when mutated in humans — results in Parkinson's disease.

People who are born with mutations in the parkin gene do not develop Parkinson's disease until later in adult life. The same is true for fruit flies with defects in clu or parkin: These fruit flies proceed through the larval and pupal stage of insect development and emerge as adults, but quickly die because their muscles and neurons degenerate.

"If you think about a tissue in the body that uses more energy than anything else, of course it's your muscle tissue," Geisbrecht said. "Proper mitochondrial function is essential to having healthy, developed muscles. It's an important connection."

Geisbrecht's team plans to continue studying fruit flies to better understand the connection between human disease genes and muscle function. Their work could lead to better treatment for Parkinson's disease or other muscle diseases.

Aside from muscle or neurodegenerative diseases, maintaining healthy muscle tissue also is important in the general population, where common diseases can also lead to muscle problems. For example, muscle wasting, or muscle deterioration, can be a huge problem for people with diabetes or cancer.

"Muscle wasting for people with end-stage diabetes or cancer is often a bigger problem than the cancer or diabetes itself because it causes people to become immobile and lose the ability to make their muscles function well again," Geisbrecht said. "We want to understand what happens at the cellular level — what these genes or proteins are doing."

The researchers have been supported by the National Institutes of Health, the American Heart Association, the National Science Foundation and Kansas State University's Johnson Cancer Research Center.

The biochemistry and molecular biophysics department in in the College of Arts and Sciences. 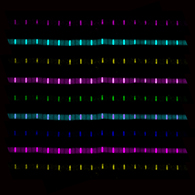 By studying the fruit fly, Kansas State University researchers have found a connection between a gene called clueless and genes that cause Parkinson's disease.

"If you think about a tissue in the body that uses more energy than anything else, of course it's your muscle tissue."