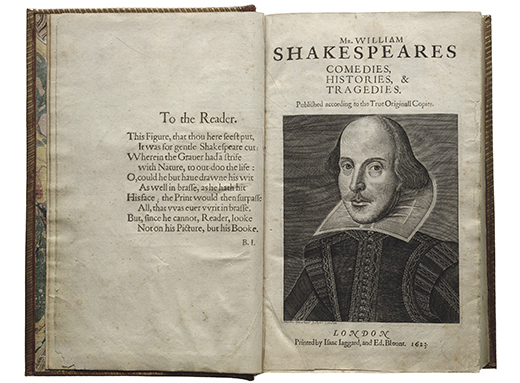 MANHATTAN — Kansas State University has been selected as a host site for "First Folio! The Book that Gave Us Shakespeare," a national traveling exhibition of the Shakespeare First Folio, one of the world's most treasured books. The Folger Shakespeare Library, in partnership with the Cincinnati Museum Center and the American Library Association, is touring a First Folio of Shakespeare in 2016 to all 50 states, Washington, D.C., and Puerto Rico.

Final touring dates for the exhibition will be announced in April.

"We are thrilled that K-State has been selected as the one site in Kansas to host the traveling exhibition," said Karin Westman, department head of English. "We're grateful to our campus and community partners, especially K-State Libraries and the Beach Museum of Art, for their support of the project, so we could meet the Folger Library's strict guidelines for care of the folio during its time on campus."

Many of Shakespeare's plays, which were written to be performed, were not published during his lifetime. The First Folio is the first collected edition of Shakespeare's plays. It was published in 1623, seven years after Shakespeare's death. Two of Shakespeare's fellow actors compiled 36 of his plays, hoping to preserve them for future generations. Without it, the world would not have 18 of the playwright's works, including "Macbeth," "Julius Caesar," "Twelfth Night," "The Tempest," "Antony and Cleopatra," "The Comedy of Errors" and "As You Like It." All 18 appear for the first time in print in the First Folio, and would otherwise have been lost.

Don Hedrick, professor of English and expert in Shakespeare and Renaissance drama, initiated the collaboration necessary for the successful application, which included proposed events and programs in conjunction with the exhibition.

"Having been selected as the Kansas site for the exhibit, K-State will sponsor a wide range of outreach events for the campus and local community," Hedrick said. "In addition to volunteer activities by community organizations and schools, faculty from the English department and School of Music, Theatre, and Dance will offer lectures, performances and demonstrations to enhance public understanding and appreciation of Shakespeare's work. At least 12 members of the English department alone will provide public activities that link Shakespeare and his folio to children's literature, creative writing, the history of books, representations in art, his influence historically and in popular culture and film, and more."

"First Folio! The Book that Gave Us Shakespeare" has been made possible in part by a major grant from the National Endowment for the Humanities: Exploring the human endeavor, and by the generous support of Vinton and Sigrid Cerf and the Google Inc. Charitable Giving Fund of Tides Foundation. Sponsorship opportunities of this major exhibition and the Folger's other "Wonder of Will" programs commemorating the 400th anniversary of Shakespeare's death are available; learn more at http://www.folger.edu.

The following is more information about the “First Folio! The Book that Gave Us Shakespeare" sponsors and partners.

• About Folger Shakespeare Library: Folger Shakespeare Library is a world-renowned center for scholarship, learning, culture and the arts. It is home to the world's largest Shakespeare collection and a primary repository for rare materials from the early modern period, 1500-1750. The Folger is an internationally recognized research library offering advanced scholarly programs in the humanities; an innovator in the preservation of rare materials; a national leader in how Shakespeare is taught in grades K–12; and an award-winning producer of cultural and arts programs — theatre, music, poetry, exhibits, lectures and family programs. Learn more at http://www.folger.edu.

• About Cincinnati Museum Center: Cincinnati Museum Center, or CMS, at Union Terminal is a nationally recognized institution and national historic landmark. Dedicated to sparking community dialogue, insight and inspiration, CMC was awarded the 2009 National Medal for Museum and Library Service from the Institute of Museum and Library Services and received accreditation from the American Alliance of Museums in 2012. CMC is one of only 16 museums in the nation with both of these honors, making it a unique asset and a vital community resource. Union Terminal has been voted the nation's 45th most important building by the American Institute of Architects. Organizations within CMC include the Cincinnati History Museum, Duke Energy Children's Museum, Museum of Natural History & Science, Robert D. Lindner Family OMNIMAX® Theater and Cincinnati History Library & Archives. Recognized by Forbes Traveler Magazine as the 17th most visited museum in the country, CMC welcomes more than one million visitors annually. For more information, visit http://www.cincymuseum.org.

• The association's Public Programs Office provides leadership, resources, training and networking opportunities that help thousands of librarians nationwide develop and host cultural programs for adult, young adult and family audiences. The mission of the office is to promote cultural programming as an essential part of library service in all types of libraries. Projects include book and film discussion series, literary and cultural programs featuring authors and artists, professional development opportunities and traveling exhibitions. School, public, academic and special libraries nationwide benefit from the office's programming initiatives. Additional information can be found at http://www.ala.org/programming.