Established by Congress in 1986 to honor Sen. Barry M. Goldwater from Arizona, the scholarship was awarded to 417 college students across the country for the 2022 competition. The awardees were selected from a pool of 1,242 applicants from 433 institutions. Awardees receive up to $7,500 annually for college-related expenses. Both K-State students have active undergraduate research projects and intend to pursue careers in mathematics, science or engineering — a requirement of the scholarship.

"When we search for Goldwater candidates, our K-State nominating committee looks for individuals who are outstanding academically," said Jim Hohenbary, director of the K-State Office of Nationally Competitive Scholarships. "However, we are also looking for people who have been passionate participants in undergraduate research — individuals who demonstrate the potential to thrive in future research environments. Both Ava and Lexe fit that description perfectly. It is gratifying to know that the Goldwater selection committee saw those attributes as well."

West researches with Kimberly Kirkpatrick, professor of psychological sciences, in the Reward, Timing and Decision Laboratory. West is studying time-based interventions to improve self-control in rats. In her current project, she is examining if these interventions increase neural activity and promote the growth of synaptic connections between neurons in brain regions associated with self-control. The goal of her project is to determine the relationship between neural activity, synaptic growth and timing ability.

West is involved in the McNair Scholars Program and is an undergraduate teaching assistant. She has received a College of Arts and Sciences Undergraduate Research Award. West attended Junction City High School and is the daughter of Stephanie Boyer, Junction City.

Stoltz is working with Nicholas Wallace, associate professor of biology, on research involving human papillomavirus, or HPV. She is working on a project involving the E7 oncogene in the alpha-HPV strain. For the past three summers, she also has worked at the University of Kansas Medical Center in a reproductive research lab under the direction of Lane Christenson, professor of molecular and integrative physiology. Her project aims to understand the effects of spaceflight and microgravity on the adrenal gland. She has given both oral and poster presentations on her research for K-INBRE, or the Kansas Idea Network of Biomedical Research Excellence, and at the American Society for Gravitational and Space Research annual conference.

She has been a K-INBRE summer scholar two times and received an award of excellence from K-INBRE for her poster presentation during a symposium. Stoltz has received multiple K-State awards and scholarships, including an Office of Undergraduate Research and Creative Inquiry Research Grant, a Wabash Cannonball Scholarship, a Distinguished University Scholar Award and the Rathbone Scholarship.

She is the sergeant-at-arms for the K-State student branch of the American Society of Agricultural and Biological Engineers and is involved in Engineering Ambassadors. She serves as the recruitment data assistant for Kappa Alpha Theta sorority. 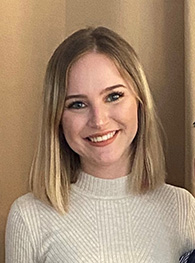 Lexe West, junior in psychology, is a 2022 Goldwater scholar. 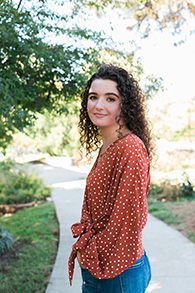