Polytechnic student is 2021 Kyle Pelton Student Employee of the Year 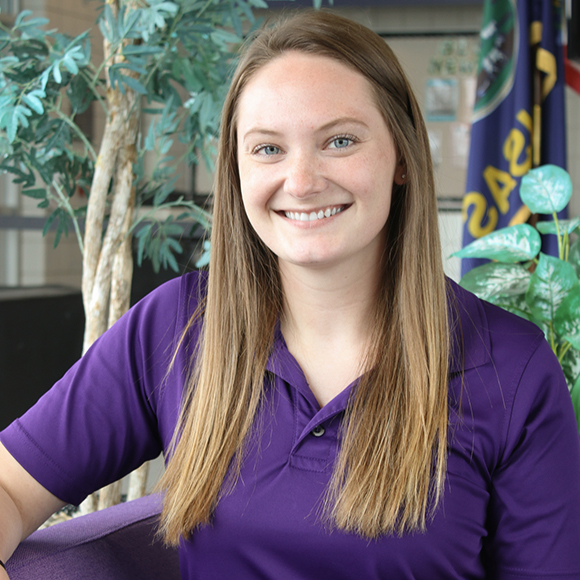 SALINA — The top student employee at Kansas State University is a senior in airport management from the Kansas State Polytechnic Campus.

Jazstyn "Jaz" Moyer, a senior from Ulysses, has been named the winner of K-State's Kyle Pelton Student Employee of the Year award, presented by K-State Career Services to recognize the importance of the student work experience. Selection is based on nominations of student workers from all K-State campuses and is given to a student who performs invaluable services with enthusiasm, dedication and initiative. Moyer is the first K-State Polytechnic student employee to be selected for the award.

Moyer was nominated for her work as intramural student coordinator and a front desk attendant at the K-State Polytechnic Student Life Center. Under her leadership, the number of intramural program offerings available to Polytechnic students doubled. Moyer is described as an invaluable employee to the Student Life Center, often being the first to arrive and last to leave — serving as an extension of full-time staff.

Along with her campus job, Moyer completed a 17-month internship with the Salina Airport Authority. The experience allowed her to work across three different departments: operations, finance and administration. Her skills, dedication and work ethic also turned that internship into a full-time job.

"I have not witnessed a student work this hard in many facets of their career," said Kyle Chamberlin, director of student life at K-State Polytechnic. "To have a job lined up, zero debt leaving college and a community here that can look up to her in so many ways, it's just very impressive."

"I come from a long line of pilots and always knew I wanted to go into something aviation-related," said Moyer, who was 4 months old when she took her first airplane ride. She went on to earn her private pilot's license.

Her childhood memories include being a "hangar rat" with her two siblings. Moyer's maternal grandfather completed airframe and powerplant certification at Kansas Technical College, which eventually became K-State Polytechnic. Her father was a parachute packer with the U.S. Army and served during the Vietnam War. He earned a private pilot's license, became a commercial pilot and managed the airport in Ulysses before establishing Moyer Aviation.

Earning the Kyle Pelton Student Employee of the Year award is an extra special honor for Moyer as the award's namesake also was from Ulysses. Pelton attended K-State and was recognized as student of the year in 2016. He died in an auto accident later that year. The award was named after Pelton to honor his memory.

After graduating from K-State Polytechnic on May 8, Moyer will be the administration specialist at the Salina Airport Authority. Her job will span across five key airport areas —security, certification, operations, administration and finance — and she will also work closely with SkyWest Airlines and the Transportation Security Administration.

"My favorite part of this campus is the tight-knit community," Moyer said. "No one goes unnoticed and it's easier to be held accountable. My courses were taught by industry professionals and allowed me to immediately turn around and apply my education in the field."