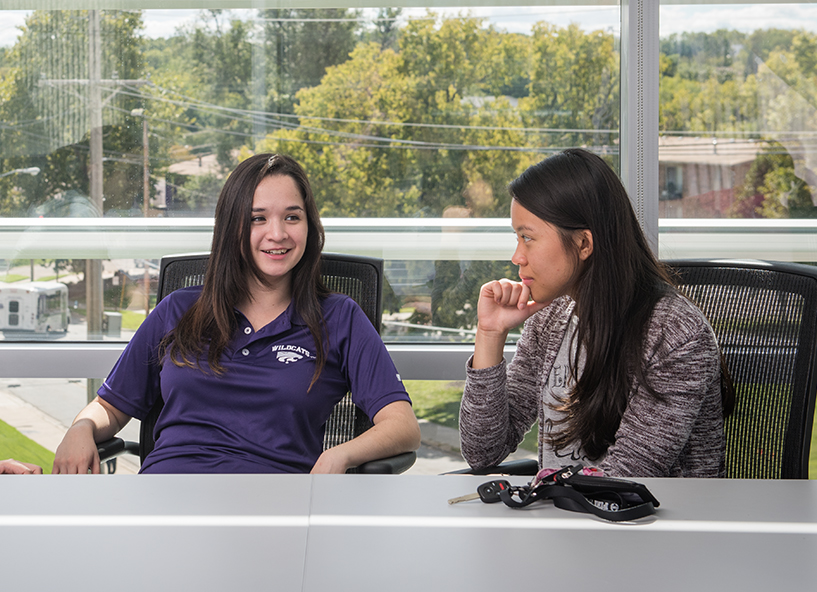 Open to those with entrepreneurial drive, the weekend is a 48-hour event for developers, designers and entrepreneurially minded people to gather and create a startup.

The university's Alice Lam, junior, Wichita, and Fernanda De La Torre, senior, Kansas City, Missouri, working from a 2017 All-University Open House project — the autonomous assistive quadcopter — competed with the winning idea for a series of programmable smart toys that children can modify physically and, by changing the software, learn about artificial intelligence.

Lam and De La Torre are both research programmers in the Laboratory for Knowledge Discovery in Databases, directed by William Hsu, professor of computer science, who also served as faculty adviser for the original Open House team. That team included four other computer science majors and Octavio Sosa, an entrepreneur from Kansas City, who helped originate the team with De La Torre when the two had participated in undergraduate research projects at the University of Missouri during summer 2016.

In the initial qualifying round, De La Torre, Lam and Sosa pitched their idea for the toys and received enough votes from participants to proceed. Approximately half of the teams pitching make it to the competition round, where students from other universities are added as team members for the rest of the event.

With four new members, team Zoobot then developed a business case and marketing plan, and demonstrated a prototype, focusing on the artificial intelligence and object-recognition capabilities of the toys. The team was awarded first place by the event judges and also won the People's Choice award, voted on by attendees.

Teams were provided with resources via facilitators and mentors teams who bring expertise from various industries in the Kansas City community to work with the students. Local sponsors included the Enterprise Center in Johnson County, Eyeverify, the Kauffman Foundation, Briteworks and Venture Legal. The event is led by volunteer community leaders.

Lam is a scholar of the Kansas Louis Stokes Alliance for Minority Participation, a National Science Foundation program aimed at increasing the quality and quantity of minority graduates of science, technology, engineering and mathematics programs, and at preparing interested students for graduate study.

De La Torre, a student in the Kansas State University Honors Program, is also a member of the Developing Scholars Program, which offers high-achieving serious-minded students research projects in their field of study with faculty mentors. Scholars receive academic, social and financial support while becoming integrated into the intellectual climate of the university.

Hsu, who was a visitor to Kansas City Startup Weekend and served as an unofficial adviser to team Zoobot, was invited by event organizers to be a tech mentor for the regional startup consortium.

The computer science department is part of the College of Engineering.