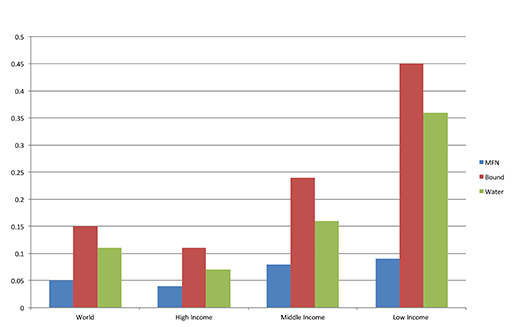 A study by a Kansas State University economist and colleagues confirms that tariff water, the difference between the tariff ceilings to which nations are bound by World Trade Organization agreements and the tariffs they actually apply, complicates trade relationships among countries. Here, the median values of most-favored-nation tariffs, or MFN; negotiated tariff levels, or Bound; and tariff water show that high-income countries like the U.S. have much less tariff water in which to maneuver. Middle-income countries like China, Brazil, India, Mexico and Malaysia, on the other hand, have more flexibility to retaliate if the U.S. raises tariffs. | Download this photo.

MANHATTAN — Two lessons taught to kindergarteners apply to nations involved in trade as well: Treat everyone the same, and if you give, you'll receive.

That's according to a Kansas State University economist studying how countries in the World Trade Organization cooperate using the principles of nondiscrimination and reciprocity.

For the paper "Cooperation in WTO's Tariff Waters?", Peri da Silva, associate professor of economics at Kansas State University, and co-authors from the United Nations Conference on Trade and Development and the University of Geneva examined the relationship between tariffs, which are the taxes countries charge each other on classes of imports or exports, and market power — a measure of countries' abilities to influence the price of goods on the world stage. Large developed nations like the U.S. have much more market power than smaller or developing nations.

The paper will be published in the prestigious Journal of Political Economy.

"The concept of the WTO is to make sure that countries are conscious of their effects on others," da Silva said. "It's very simple and well thought out because of the two pillars. The tariff the U.S. applies on Germany is the same for Japan and for Malaysia on the same product, for example, and if a country is opening its markets to your products, you should reciprocate."

Acting according to WTO pillars is complicated by the presence of "tariff water" — or the difference between the tariff ceilings to which nations are bound by trade agreements and the tariffs they actually apply. Da Silva and co-authors confirmed that the presence of tariff water allows countries to engage in noncooperative behavior that harms other nations' economies. Shifting to cooperative tariffs, on the other hand, leads to reductions in tariffs and a better bottom line for all.

This means that the WTO has plenty of work to do to safeguard the fairness of world trade, according to da Silva. Individual nations also have a role to play, because countries operating in tariff waters and charging higher tariffs may cause other nations to retaliate. Da Silva said the U.S. can cause a lot of damage if it raises tariffs.

"You have to be careful because if you shift costs to the foreigners by raising tariffs, they can respond," da Silva said. "You could return to the terrible situation of the 1930s where countries were not constrained. That ended badly — it aggravated the Great Depression. That's a nightmare we don't want to go back to."

The 2016 U.S. presidential election brought frequent discussions of international trade agreements such as the North American Free Trade Agreement and the European Union. Da Silva said 11.5 million Americans are dependent on exports, including workers employed in highly competitive industries such as agriculture, high-tech and defense, and that pursuing noncooperative, unilateral trade policies could damage those sectors in the long term.

If the U.S. wanted to protect a certain industry such as auto manufacturing, for example, a tariff on foreign cars could provide a brief boost to that industry, but it would carry consequences.

"It's easy in the political cycle to say you will protect industries, but people don't understand the other side of that," da Silva said.

"You will benefit some in that industry, then you realize those that export cars to the U.S. are not going to be happy because you're shifting the cost of this policy to foreigners by shifting demand from the foreign cars. Those foreign companies would be hurt. So the companies would ask their countries to retaliate, which would hurt American export industries," da Silva said.

Trade wars result, and da Silva said no one benefits when countries resort to harming each other. Instead, he hopes the U.S. will respect the international agreements it helped craft, particularly as consumers have grown accustomed to sophisticated products at reasonable prices. Concerns about China and other large developing economies can be addressed through WTO agreements, which is a better approach than pursuing unilateral actions, da Silva said.

"If we start a conflict with China, it will reverberate through the economy," da Silva said. "The power of the U.S. means our actions have consequences. We need to display leadership."

The economics department is part of Kansas State University's College of Arts and Sciences.

Kansas State University's Peri da Silva examines tariff behaviors of countries and the potential effects of higher tariffs on export-dependent industries such as agriculture and high-tech.

"You have to be careful because if you shift costs to the foreigners by raising tariffs, they can respond. You could return to the terrible situation of the 1930s where countries were not constrained. That ended badly — it aggravated the Great Depression. That's a nightmare we don't want to go back to."