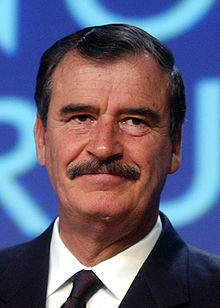 He is the second of nine children born to farmer Jose Luis Fox, now deceased, and Mercedes Quesada.

As a child, together with his family he moved to the San Cristobal ranch in the municipality of San Francisco del Rincon, in the state of Guanajuato, where he would play with the children of the communal land owners, share with them their childhood and, in his own words, "see close up one of the evils that unnecessarily afflicted our country: poverty".

Vicente Fox is friendly, respectful, straightforward, and honest. Life on the farm taught him to value the loyalty of people and appreciate Mexico's enormous potential to become in every way a successful nation.

"I know the importance of opportunity -he says firmly-. I grew up on the land with the children of peasants and the only thing that sets me apart from my childhood friends are the opportunities I had and they did not".

He studied Business Administration at the Mexico City campus of the Ibero-American University. Looking back, Vicente Fox remembers how his provincial appearance, "like a ranchhand", contrasted with that of his classmates.

He went on to study for a Diploma in Upper Management, taught by professors from Harvard University Business School.

In 1964 he joined Coca-Cola de Mexico as a route supervisor.

From aboard a delivery truck he had the opportunity to see for himself Mexico's most remote corners. Thanks to his efforts, he was promoted to President for Mexico and Latin America, the youngest person in the company to occupy such a position.

With his accumulated experience, he decided to return to Guanajuato to participate actively in business, politics, society, and education, to improve life in his state.

Whether as a businessman or politician, Vicente Fox Quesada has always done everything he can to improve the common good and ensure equal opportunities.

A loving father, he has shared the joy of home and work with his four adopted children: Ana Cristina, Vicente, Paulina and Rodrigo.

He has served as a Board Member of the United States-Mexico Chamber of Commerce and as a Director of the Grupo Fox, whose companies -involved in the farming and agribusiness industries and the manufacture of footwear and cowboy boots for export- provide many employment opportunities.

He joined the National Action Party (PAN) in the 1980s, encouraged by the late Manuel J. Clouthier.

In 1988, he was elected Federal Deputy for the Third District of Leon, Guanajuato. While in Congress he paid special attention to agricultural matters. At that time, he also wrote for several national and state newspapers.

In 1991 he ran in the election for governor of the state of Guanajuato. In 1995, he stood again, this time in the extraordinary elections for governor, and won by a significant majority.

During his administration, Vicente Fox always gave clear account both of the state's finances and his personal assets. He made Guanajuato the fifth largest economy in Mexico and in light of the excellent results of his government, was chosen by the Alliance for Change (PAN-PVEM) as its candidate to the presidency of Mexico in the elections to be held in the year 2000.

He wrote an autobiographical book called Vicente Fox a Los Pinos (his path to the presidential residence) summarizing his political beliefs and immense passion for Mexico. July 2, 2000, Vicente Fox won the elections and that same day promised to "...put together a plural, honest, and capable government. A government that includes this country's best citizens".

Later that year, during his December 1 inaugural address, the President of all Mexicans, Vicente Fox Quesada, undertook to continue to build a generous country:

"Today, all of us men and women are responsible for carrying out the mandate of those exemplary elections", he said unflinching. "A mandate for change, to bring in a democratic exercise of power that is within our grasp, where all of us will live better lives".

A year after his victory in the presidential elections, July 2, 2001 the official residence of Los Pinos was the setting for an historic event: the civil marriage of Vicente Fox Quesada, president of the United Mexican States, to Mrs. Marta Sahagun Jimenez, who in this way celebrated three very important events: the President's 59th birthday, the first anniversary of democratic change in Mexico, and their wedding.

Today, Mexico is different. And the President of the Republic works tirelessly to fulfill the commitment he mentioned in his inaugural address: "I have and will continue to have an obligation to drive forward the efforts of this great nation. To work passionately for those who made Mexico what it is, for those who built the Mexico we have today, and for those who dreamt of a different, successful, and triumphant Mexico".