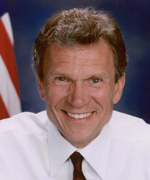 Senator Tom Daschle was first elected to the Senate in 1986, after serving four terms in the U.S. House. He was re-elected to the Senate by overwhelming margins in 1992 and '98. In 1994 he was chosen by his colleagues to become Democratic leader of the Senate. Only Lyndon Johnson served fewer years before being elected to serve his party. Daschle currently serves on the Senate Agriculture Committee. In past Congresses, he has served on the Veterans, Indian Affairs, Finance and Ethics committee. He has championed a variety of issues during his career, including working for agricultural programs and policies that help family farmers and ranchers, authoring several bills to expand health services in rural areas and working to secure key benefits for both Vietnam and Gulf War veterans. He also was the principal author of the reformulated gasoline provision of the 1990 Clean Air Act amendment, which works to reduce smog and various cancer-causing emissions. Daschle was born in Aberdeen, S. D., the eldest of four brothers. He was first person in his family to graduate from college, earning a degree in political science from South Dakota State University in 1969. He then served three years as an intelligence officer in the U.S. Air Force Strategic Air Command and spent five years as an aide to South Dakota Sen. James Abourezk.

Senator Tom Daschle is the 133rd speaker in the Landon Lecture Series.

Information and photo obtained from: http://daschle.senate.gov/bio.html