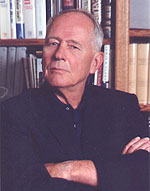 My World War II books flowed out of the association with Eisenhower, along with my feelings toward the GIs. I was ten years old when the war ended. I thought the returning veterans were giants who had saved the world from barbarism. I still think so. I remain a hero worshiper. Over the decades I've interviewed thousands of veterans. It is a privilege to hear their stories, then write them up.

What drives me is curiosity. I want to know how this or that was done -- Lewis and Clark getting to the Pacific; the GIs on D-Day; Crazy Horse's Victory over George Custer at the Little Big Horn; the making of an elite company in the 101st Airborne, and so on. And I've found that if I want to know, I've got to do the research and then write it up myself. For me, the act of writing is the act of learning. I'm blessed to have Moira Buckley Ambrose as my wife. She was an English Lit major and school teacher; she is an avid reader; she has a great ear. At the end of each writing day, she sits with me and I read aloud what I've done. After more than three decades of this, I still can't dispense with requiring her first of all to say, "That's good, that's great, way to go." But then we get to work. We make the changes. This reading aloud business is critical to me -- I've developed an ear of my own, so I can hear myself read -- as it reveals awkward passages better than anything else. If I can't read it smoothly, it needs fixing.