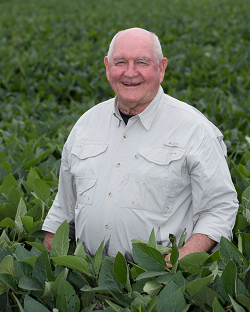 Sonny Perdue, U.S. secretary of agriculture, spoke at Kansas State University's Landon Lecture Series. Secretary Perdue's speech, "Leave It Better Than You Found It: Lessons in Public Service I Learned on the Farm," was at 10:30 a.m. on Thursday, Nov. 1, in McCain Auditorium.

Perdue's life was shaped and fashioned growing up on his family's farm. His lecture focused on the lessons that he learned from family, school, church, sports and caring for the land and animals that formed a foundation of serving others. He has applied the lessons he learned while growing up on the farm to transform the culture of public service to focus on serving the citizens.

Nominated by President Trump, Perdue has been serving as the nation's 31st secretary of agriculture since April 25, 2017, and brings a strong background in agriculture, public service and agribusiness to the post. He grew up on a dairy and diversified row crop farm in rural Georgia. As a young man, he served in the U.S. Air Force, rising to the rank of captain. After his military service, he went on to earn his Doctor of Veterinary Medicine from the University of Georgia and worked in private practice in North Carolina.

Perdue pursued a political career next and served as a Georgia state senator for 11 years. He also was elected president pro tempore by his senate colleagues. As a state senator, he was recognized as a leading authority on issues including energy and utilities, agriculture, transportation, emerging technologies and economic development, and for his ability to grasp the nuances of complex problems.

Elected to two terms as governor of Georgia, from 2003-2011, Perdue was credited with transforming a budget deficit into a surplus, dramatically increasing student performance in public schools, and fostering an economic environment that allowed employers to flourish and manufacturers and agricultural producers to achieve record levels of exports. He was named Public Official of the Year in 2010 by Governing magazine.

Perdue followed his public service with a successful career in agribusiness, focusing on commodities and transportation in enterprises that have spanned the southeastern U.S. He also has served as a board member for the National Grain & Feed Association and as president of both the Georgia Feed and Grain Association and the Southeastern Feed and Grain Association. Perdue has long-standing, close relationships with the leadership of the American Farm Bureau and has been recognized by the Georgia 4-H and FFA programs, among others, for his leadership in agriculture.

Perdue was the 179th speaker and 11th secretary of agriculture to take part in the lecture series.