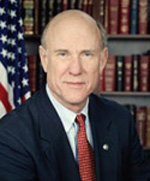 Delivering the 132nd lecture will be Roberts, who will become only the third K-State alum to speak in the prestigious lecture series.

Roberts earned a bachelor's degree from K-State in 1958 and then served in the U.S. Marine Corps for four years. After leaving military service, he worked as a reporter and editor for several Arizona newspapers. In 1967 he joined the staff of Sen. Frank Carlson of Kansas, and in 1969 he became administrative assistant to Congressman Keith Sebelius of Kansas' First District. Roberts succeeded the retiring Sebelius in 1980 when he was elected to his first term in the U.S. House. He served in the House until 1996, when he ran for the Senate seat being vacated by Nancy Landon Kassebaum Baker, who retired. He won re-election in 2002.

Roberts also is heavily involved in the nation's war on terror. He is chair of the Senate Select Committee on Intelligence and is the senior member of the Senate Armed Services Committee, where he chairs the Subcommittee on Emerging Threats and Capabilities. The subcommittee oversees the military's contribution to homeland security and efforts to prevent the spread of nuclear, chemical and biological weapons. In addition, Roberts serves on the Senate's Health, Education, Labor and Pensions Committee, where he has introduced legislation dealing with child care and the nursing shortage.

Roberts was chair of the House Agriculture Committee from 1995-97, leading the reform of several federal farm policies. He is a member of the Senate Agriculture Committee, where he helped write and pass drought relief legislation in 2003 and wrote sweeping reforms of the federal crop insurance program in 2000.

The senator also has been an advocate for higher education in Kansas by supporting efforts to increase the state's investment in math, science and technology and in research infrastructure. Among his efforts include helping to secure federal funding for K-State's new Biosecurity Research Institute and other key research projects at the university and other state schools. He also established a blue-ribbon panel, the Advisory Committee on Science, Technology and Future, to advise him on the state's technology needs.