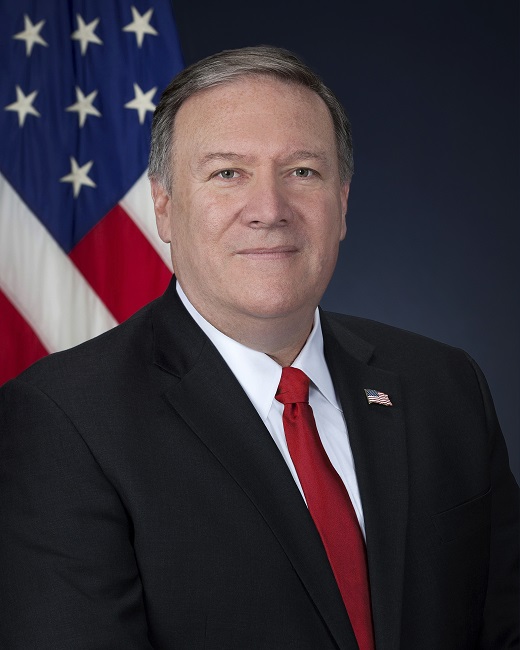 "Mike Pompeo got his start in government in Kansas, serving as a three-term congressman for the state's 4th District after running two successful businesses in the state," said Linda Cook, chair of the Landon Lecture series and the university's chief of staff and director of community relations. "Now, as secretary of state, he serves as the chief foreign affairs adviser to President Trump, traveling the world to meet with foreign governmental leaders and carrying out the president's foreign policy."

Pompeo became the nation's 70th secretary of state on April 26, 2018. The State Department includes the Foreign Service, Civil Service and U.S. Agency for International Development. He will be the fourth secretary of state to deliver a Landon Lecture, following Henry Kissinger in 1996, George Schultz in 1986 and Edmund Muskie in 1980.

Before becoming secretary of state, Pompeo was director of the Central Intelligence Agency from January 2017 to April 2018. From 2011-2017, Pompeo represented Kansas' 4th District, which includes the city of Wichita and surrounding areas. He was a member of the House Intelligence Committee as well as on the Energy and Commerce committees and the House Select Benghazi Committee.

Pompeo came to government service after serving in the military and the business world. He graduated first in his class at the United State Military Academy at West Point in 1986 and was a cavalry officer patrolling the Iron Curtain before the fall of the Berlin Wall. He also served with the 2nd Squadron, 7th Cavalry in the Army's Fourth Infantry Division. After leaving active duty, Pompeo graduated from Harvard Law School where he was an editor of the Harvard Law Review.

In his business career, Pompeo founded Thayer Aerospace, where he served as CEO for more than a decade. He later became president of Sentry International, an oilfield equipment manufacturing, distribution and service company based in Wichita.