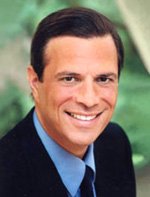 Michael Beschloss is an award-winning historian of the Presidency and the author of seven books, including his most recent work, the acclaimed New York Times bestseller The Conquerors: Roosevelt, Truman and the Destruction of Hitler's Germany, 1941-1945. Newsweek has called Beschloss "the nation's leading Presidential historian." He is a regular commentator on PBS's The NewsHour with Jim Lehrer and a contributor to ABC News.

Beschloss was born in Chicago on November 30, 1955. He is an alumnus of Eaglebrook School, Andover, Williams College and Harvard University. He has been an historian on the staff of the Smithsonian Institution (1982-1986), a Senior Associate Member at Oxford University in England (1986-1987), and a Senior Fellow of the Annenberg Foundation in Washington, D.C. (1988-1996).

The Conquerors was an immediate national bestseller. In a front-page review, Thomas Powers wrote in The New York Times Book Review that the "vigorously written" book was "history as it was spoken at the time, and there is not a dull page."

Beschloss's first book, Kennedy and Roosevelt: The Uneasy Alliance (Norton, 1980), started as his senior honors thesis at Williams College. Mayday: Eisenhower, Khrushchev and the U-2 Affair (Harper, 1986), was called "a grand narrative. . .crowded with well-drawn portraits" by the New Yorker. The Crisis Years: Kennedy and Khrushchev, 1960-1963 (HarperCollins, 1991), won the Ambassador Book Prize and was called by the New Yorker the "definitive" book on John Kennedy and the Cold War.

Beschloss co-wrote At the Highest Levels: The Inside Story of the End of the Cold War (Little, Brown, 1993) with Strobe Talbott. As literary executor for the late Newsweek columnist Meg Greenfield, he edited Ms. Greenfield's posthumously-published book Washington (PublicAffairs, 2001), which was a New York Times bestseller. He is now working on a history of Abraham Lincoln's last days and his assassination, to be published by Simon & Schuster.

Beschloss holds two honorary doctorates. He is a trustee of the White House Historical Association, the National Archives Foundation, the Thomas Jefferson Foundation (Monticello), the Urban Institute, and the University of Virginia's Miller Center of Public Affairs. He lives in Washington, D.C., with his wife Afsaneh and their two sons.