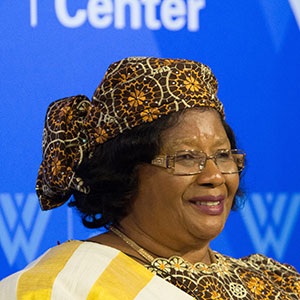 As president of Malawi from 2012-2014, Banda was credited with turning around the nation's ailing economy. Under the economic reforms she instituted, Malawi's rate of economic growth rose from 1.8 percent in 2012 to more than 6.2 percent in 2014. In that same time span, Malawi's operational industrial capacity rose from 35 percent to 85 percent.

Banda also repealed a number of laws which had weakened democratic institutions, infringed on civil liberties and restricted freedom of the press. The health of women and children was a priority in Banda's presidency. She established the Presidential Initiative on Maternal Health and Safe Motherhood, which helped drop the maternal mortality rate in Malawi.

Before becoming president of Malawi, Banda served as the nation's vice president, foreign minister, minister of gender and child welfare, and as a member of its Parliament. As minister of gender and child welfare, she championed enactment of the Prevention of Domestic Violence Bill in 2006, which provided the legal framework to support the prevention and elimination of all forms of violence against women and girls.

Since leaving office, Banda serves on the boards of Nutrition International Canada and the Tana High Level Forum of Peace and Security in Africa. She is a member of the Council of Women World Leaders and a distinguished fellow with the Woodrow Wilson International Center for Scholars and the Center for Global Development.

The founder of the Joyce Banda Foundation International in 1997, Banda continues her work with the foundation today to transform villages in Malawi by supporting women's economic empowerment, education, maternal health and HIV/AIDS programs, leadership training and human rights. She also serves as a panelist and motivational speaker at international conferences and forums.

Her degrees include a bachelor's in gender studies from Atlantic International University and a master's in leadership from the Royal Rhodes University of Canada.