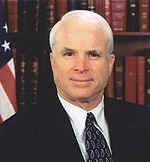 "We're most pleased that Sen. McCain has accepted our invitation to deliver the 114th Landon Lecture at Kansas State University," said Charles Reagan, chairman of the lecture series. "John McCain is a highly respected senator who has been at the forefront of such issues as campaign finance reform, tax relief and tobacco regulation."

McCain is currently serving his third term in the Senate, where he is chairman of the Senate Commerce, Science and Transportation Committee and serves on the Armed Services and Indian Affairs committees. He was first elected to the Senate in 1986, following two terms in the U.S. House from 1982-86. McCain also has served as chairman of the International Republican Institute since 1993.

A possible contender for the Republican presidential nomination in 2000, McCain has formed a presidential exploratory committee. He has not made a formal decision on his candidacy.

McCain is a decorated Navy pilot. He graduated from the U.S. Naval Academy and served 22 years in the Navy, including more than 5 years as a prisoner of war in Vietnam after his plane was shot down over Hanoi in 1967. His many military honors include the Silver Star, Bronze Star, Legion of Merit, Purple Heart and Distinguished Flying Cross.