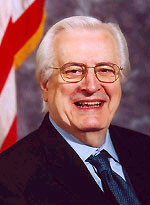 As chairman of the House Judiciary Committee, Hyde had a leading role in the impeachment hearings and trial of President Clinton in late 1998 and early 1999.

"Congressman Hyde accepts few outside speaking engagements. We are honored that he has accepted our invitation to speak at Kansas State University," said Charles Reagan, chairman of the Landon Lecture Series.

Hyde joined the U.S. Navy in 1942 and served in the South Pacific, New Guinea and the Philippines during World War II. He also was a member of the Naval Reserves from 1946 to 1968, retiring at the rank of commander.

Hyde earned his law degree from the Loyola University School of Law and served as a trial lawyer.

His numerous awards and honors include being named Catholic American of the Year in 1994; an annual recipient of the Watchdog of the Treasury Award since 1975; named a Guardian of Small Business by the National Federation of Independent Business; Grace Caucus Award from Citizens Against Government Waste; and the National Security Leadership Award and Distinguished Service Award, both from the Disabled American Veterans.