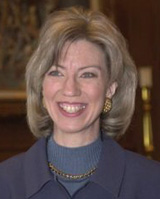 U.S. secretary of the interior

Gale Norton was confirmed as the nation's 48th secretary of the interior in January 2001. Prior to joining the administration of President George W. Bush, she served as attorney general of Colorado from 1991-99. In that elected post, she represented the state in several key matters, including winning a major court victory to get the federal government to clean up hazardous wastes at the former Rocky Flats Nuclear Weapons Plant and at the Rocky Mountain Arsenal; and as a negotiator of the $206 billion national tobacco settlement, representing Colorado and 45 other states in the historic lawsuit.

Norton's work with environmental policy also includes serving as chair of the environment committee for the National Association of Attorneys General; as a member of the Western Water Policy Commission, appointed by President George H. Bush; and as environmental committee chair for the Republican National Lawyers Association.

Prior to being elected Colorado attorney general, Norton was assistant solicitor of the Interior Department, overseeing endangered species and public lands legal issues for the National Parks Service and the Fish and Wildlife Service. She also worked as assistant to the deputy secretary of agriculture.