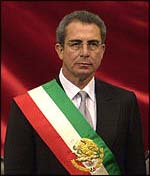 Zedillo was appointed secretary of education in early 1992 with a mandate to reform the Mexican basic education system. Zedillo entered the presidential race in 1994 when his party's original candidate was assassinated. He was elected Aug. 21, 1994, receiving 50 percent of the votes cast. More than 78 percent of Mexico's elegible voters participated in the election.

As president, Zedillo pushed for political reforms to help achieve full democracy in Mexico. His government also had to deal with major financial and economic crisis. Under Zedillo, Mexico achieved, from 1996 to 2000, its highest gross domestic product in recent history.