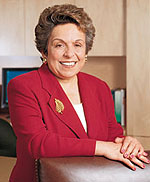 Donna E. Shalala is the longest serving secretary of dealth and human services in U.S. history. She joined the Clinton administration in January 1993 to lead the federal government's principal agency for protecting the health of all Americans and providing essential human services. With a Fiscal Year 2000 budget of approximately $387 billion and over 61,000 employees, HHS administers a wide variety of programs including Medicare, Medicaid and federal welfare and children's programs.

In Secretary Shalala's seven years as secretary, the department has guided the welfare reform process; made health insurance available to an estimated 2.5 million children through the approval of 50 state and territory Children's Health Insurance Programs (CHIP); raised child immunization rates to the highest levels in history; led the fight against young peoples' use of tobacco; created national initiatives to fight breast cancer, racial and ethnic health disparities, and violence against women; and crusaded for better access and better medications to treat AIDS.

Secretary Shalala has redefined the role of HHS Secretary, partnering with businesses and other private sector organizations to extend the department's public health and education mission. She appeared in a "Milk Mustache" advertisement to help promote osteoporosis prevention and threw the first pitch (the full 60 feet, six inches) for the Baltimore Orioles' 1998 season after championing a campaign to break the link between smokeless tobacco and professional baseball. During her tenure, HHS launched the "Back to Sleep," "Girl Power!" and "Choose Your Cover" campaigns, working with corporations and advocacy organizations to improve the lives and health of babies, girls and young adults.

Throughout her career, Secretary Shalala has been a scholar, teacher, and a public administrator. As chancellor of the University of Wisconsin-Madison from 1987-1993, she was the first woman to head a Big Ten University and was named by Business Week as one of the five best managers in higher education. During her tenure at UW, she helped to raise over $400 million for the university's endowment and spearheaded a $225 million state-private partnerships program to renovate and add to the university's research facilities for its world class scientists.

Prior to that, Secretary Shalala served as president of Hunter College for eight years, and as an assistant secretary at the Department of Housing and Urban Development during the Carter administration. From 1975-1977, she served as Treasurer of New York City's Municipal Assistance Corporation, the organization that helped rescue the city from the brink of bankruptcy. An acknowledged scholar of state and local government and finance, Secretary Shalala earned her Ph.D. from the Maxwell School of Citizenship and Public Affairs at Syracuse University in 1970. She has also served as a Peace Corps volunteer in Iran.

Secretary Shalala is one of the nation's foremost advocates for children and families, and has made improving the quality of life for America's children her highest priority. Before joining the Clinton administration, Secretary Shalala served for more than a decade on the board of the Children's Defense Fund, succeeding Hillary Rodham Clinton as chair in 1992. As a member of the 1991 Committee for Economic Development, she contributed to bipartisan reports on the basic health, welfare, and educational needs of our youngest children.

Information on Donna E. Shalala was obtained from:
http://www.hhs.gov/about/bios/dhhssec.html