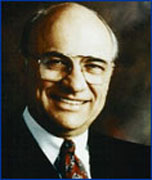 Born in Eustis, Nebraska, Dec. 10, 1930, he earned his B.S. in animal husbandry from the University of Nebraska in 1952, and served in the Air Force for five years. He earned his law degree in 1963, and in 1966, his Ph.D. in agricultural economics, from the University of Nebraska. Yeutter started his career in agriculture as a farmer and a cattle feeder in 1957. From 1960 to 1966 he served on the staff of the University of Nebraska. From 1966 to 1968 he was a member of the Nebraska governor's staff. In 1968 and 1970, he headed the University of Nebraska's mission to Colombia. In 1970 and 1971, he was the USDA Administrator for Consumer and Marketing Service and, on January 24, 1973, he became Assistant Secretary for Marketing and Consumer Services. On March 13, 1974 he was appointed Assistant Secretary for International Affairs and Commodity Programs and remained in that position until June 19, 1975. Between 1975-1977 he served as deputy special trade representative. From 1977 to 1978 Yeutter was a senior partner in the Nebraska law firm of Nelson, Harding, Yeutter, & Leonard. In 1978 he became president of the Chicago Mercantile Exchange. In July 1985 President Reagan appointed Yeutter U.S. Trade Representative. On February 16, 1989, Yeutter was sworn in as the Secretary of Agriculture, serving until March 1, 1991. Yeutter later served as chairman of the Republican National Committee.