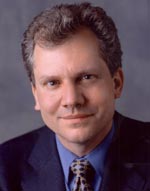 Publisher of the New York Times

"Since his appointment as publisher in 1992, Sulzberger has been instrumental in shaping the Times' news coverage, business strategies and labor relations. During his tenure, the newspaper has earned more than 20 Pulitzer Prizes and has undergone several dramatic changes, including the creation of it's popular Web site, the NYTimes.com,"said Charles Reagan, chair of the Landon Lecture Series.

Prior to his appointment as publisher, Sulzberger served as deputy publisher from 1988 to 1992. He has been a member of The New York Times Company board of director since 1997, the same year he was appointed company chairman.

He joined the newspaper in 1978 as a correspondent in Washington, D.C. He became a metropolitan reporter in 1981 and was promoted to assistant editor of the metro desk in 1982. He also has worked in advertising sales, becoming a group advertising manager; in the production department; and as an analyst in the newspaper's corporate planning department. He was named assistant publisher in 1987.

Before joining The New York Times, Sulzberger was a reporter for the Raleigh (N.C.) Times from 1974-76 and a correspondent for the Associated Press in London from 1978-78.

Sulzberger also is member of the board of the Newspaper Association of America.

Arthur Sulzberger Jr. is the 134th speaker in the Landon Lecture Series.