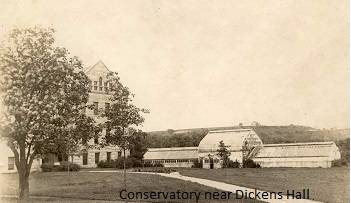 In 1871, the K-State Agriculture College purchased the Gale farmstead (once a plant nursery) that eventually became the Kansas State University Gardens.

In 1877, 100 species of trees and shrubs were sent to the college from Harvard Botanical Gardens to form a campus arboretum.

In 1907, a Victorian style conservatory (originally called the 'plant museum') was built to the immediate southeast of then Horticulture Hall which was later named Dickens Hall in honor of Dr. Albert Dickens, professor and then Department Head of Horticulture from 1902-1930.

in 1911, Mike Ahern was hired as a Professor of Horticulture.  Ahern also served as the K-State Athletic Director until 1946 and the field house was named after him.

in 1927, Professor Leon Reed Quinlan established a formal rose garden. He is credited with planting many campus trees. 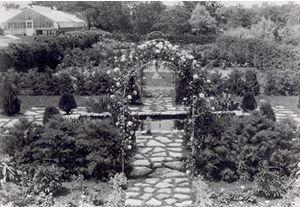 in 1978, when the formal gardens were eliminated to make way for Bluemont Hall, The Gardens and Conservatory were relocated to their current site.

In 1993, Formal design for 12 acre display garden was created by K-State Faculty and students in Landscape Architecture and Horticulture Departments.

Today, the Kansas State University Gardens are a horticulture display garden and an invaluable educational resource and learning laboratory for K-State students and the visiting public. 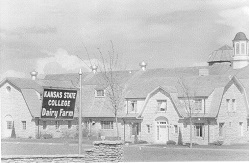 Originally, the Gardens Visitor Center was the K-State Dairy Barn and Milk House (caretaker's cottage). It was built in 1933 and housed students workers that lived upstairs and milked for their rent. The first floor contained a weighing room, milk room, refrigerator, washroom and the herdsman's office. In 1976, due to inadequate facilities, the actual dairy production was moved to a new site north of campus. Recent improvement to the Visitor Center includes several large screen televisions with photos of the Gardens in their peak seasons, plans for future development and a brief history. An interactive screen provides a map of the Gardens as well as a connection to university news.