Age has taken its toll on the Conservatory and renovation and expansion plans are underway for a new conservatory. Currently, the historic conservatory is closed to the public but remains on site. When the design work is finalized, a fund raising campaign will be made public to support efforts to expand and seamlessly blend new materials with historical features of the original structure that was built in 1907. 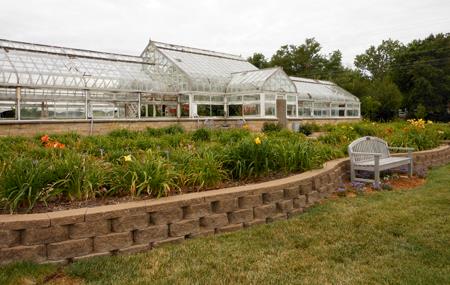 The Conservatory, originally called the Plant Museum, was built in 1907. It is representative of the Victorian architectural style typical in greenhouse construction in the late 1890s. With controlled heat and humidity, it provided a year-round growing space for plant material which couldn't survive outdoors in the Kansas climate.

In 1978, the conservatory was relocated on Denison Avenue west of the Dairy Barn to allow for the construction of Bluemont Hall. At that time, the iron frame and curved glass roof were set on a new foundation of native Kansas limestone, and interior pathways were installed to accommodate large groups of visitors.

Relocating the Conservatory to its present site was one of the first steps in developing what became the Kansas State University Gardens. The Conservatory remains an important focal point of the extensive garden and landscape plantings. The collections of plants within the Conservatory served as an educational resource for both the university and the community. The plant collections were removed and are in holding greenhouses, anxiously awaiting their return to this iconic structure.

Regional divisions within the Conservatory

Approximately 300 species of plants were grown in the Conservatory's three separate sections, with each section representing one distinct ecological region.

When the Conservatory was originally constructed, a dwarf banana plant (Musa acuminata), donated from Costa Rica, was the first plant in the tropical display. For over 100 years, the banana plant thrived and every year there was a "banana harvest" and students in the horticulture program would hold a banana split party. When the displays are replanted in the new conservatory, the banana will be planted first and the tradition will continue.