Home. Be it big or small, rented or owned, on the range or in the big city, there’s no place like it.

Finding an affordable home, though, can be a challenge across the U.S. Experts say affordable housing should cost no more than 30% of one’s annual income. But according to 2016 U.S. Census Bureau data, nearly half of Americans earning under $50,000 per year are now overburdened by housing costs and spend more than 30% of their income on housing. And for every home built for under $150,000, more than 18 homes are built for over $300,000.

A graduate architecture studio at Kansas State University wants to change that by designing affordable and energy-efficient homes that improve quality of life. The Net Positive Studio, created and led by Michael Gibson, associate professor of architecture, is a research-based studio for students in their final year of the five-year Master of Architecture program in the College of Architecture, Planning & Design.

“Our mission is to research, develop and demonstrate housing models that can support households and communities,” Gibson said. “Through lean construction and thoughtful design, the homes intend to foster the quality of life and well-being of residents by freeing up income, minimizing required maintenance, improving social connections and building restorative connections to the outdoors.”

Along with affordability, the studio focuses on designing net-zero energy homes that offset energy use through renewable energy generation, and the students use the latest technology to optimize home construction.

“Homes in the U.S. are responsible for a staggering one-fifth of national energy consumption and use more energy than commercial, institutional and industrial buildings,” Gibson said. “Moreover, the cost of housing and utilities increasingly burdens household budgets with an average utility expenditure that can exceed $2,000 annually for heating fuel and electricity.”

The 15-member 2018-2019 studio was tasked by the Mattie Rhodes Center, a community service organization in Kansas City, to introduce a new model of affordable, sustainable housing for Indian Mound, while the 14-member 2019-2020 studio is working with Stafford County Economic Development to come up with affordable, appealing rental housing in St. John.

Using research as the foundation for their home designs, Gibson said each class analyzed the number and condition of existing homes in each area. They also looked at average housing costs and median incomes. Despite the difference in population between Indian Mound and St. John, the students found the same problem in each place: aging housing stocks. In both locations, more homes are coming down than are going up each year, which makes finding an affordable home more difficult.

According to the students’ research, the Indian Mound neighborhood has 3,000-plus homes, but only one new home permit has been issued in the last 22 years.

“Indian Mound is among the historic northeast Kansas City neighborhoods known for diversity and prosperous family life,” Gibson said. “But in the last 20 years, these neighborhoods have suffered from neglect and absentee landlords.”

Just as professional architects do, each class met regularly with its client and with community members to help shape their designs and get feedback before finalizing plans.

“What I most enjoyed about the project was getting to work with and present our proposals to the community,” said Christian Carter, a member of the Indian Mound studio. “Some of these diverse northeast Kansas City neighborhoods haven’t seen much growth since the 1950s and Indian Mound wasn’t an exception. It was also really great to hear the stories and how people were hoping to bring change and reinvigorate this neighborhood while keeping the aspect of affordability at the forefront of every decision.”

In Indian Mound, the students chose to build a home on a vacant lot owned by the Mattie Rhodes Center. Their goal was to keep it affordable for the buyer most interested in this neighborhood: a family who has one or two children and may be transitioning from rental housing.

Dunn challenged the St. John studio to come up with a rental home for around $100,000 to be built on a vacant lot owned by Stafford County Economic Development. The average median income for St. John/Stafford County is $47,000 a year, which means the cost of new construction can exceed what most people can afford.

“This is not something that a lot of architecture students can say, that they got to create a house with their own two hands and solve the problems along the way that needed to be solved,” said Jameson Jones, a member of the St. John studio.

The students’ final home designs for both locations are energy-efficient, prefabricated homes with three bedrooms and two bathrooms. The Indian Mound home will be 1,033 square feet, while the St. John home will be 1,100 square feet. The foundations for both homes will be insulated so they can better retain heat in the cold months and keep cool when it’s warmer outside.

Students shifted the public and private areas in each home to optimize circulation. While the bedrooms are small, the communal areas, including the kitchens and living rooms, are bigger so families have room to spend time together. Mechanical systems in the ceiling run through the middle of the home so they don’t take up valuable space. As Net Positive Studio members, students are engaged in all facets of the home projects, including building the prefabricated components for the homes. They do so in an off-campus university workshop under the supervision of Gibson.

The components for the Indian Mound home were completed in the spring 2019 semester. The home has 26 insulated exterior and interior wall panels. The exterior panel seams will be sealed once assembled to increase energy efficiency. The home will feature high-performance vinyl windows, high-efficiency appliances and a 3.4-kilowatt solar power system in the roof. The interior walls are sanded plywood coated with polyurethane, so no drywall or painting is needed.

The layout of a Net Positive Studio home shows how the social core takes advantage of space that would be lost to hallways in a typical house, which helps to achieve a compact footprint. Generous windows in the living room offer daylight, natural ventilation, and passive solar heating that will result in the house using approximately 80% of the energy that a comparable new home would use.

The Mattie Rhodes Center is working with CoBuild, a general contractor, and Emerging Builders, a nonprofit providing construction training and educational opportunities for women and minorities, on the Indian Mound home. The center also will find the buyer for the home, which is being financed in part with a U.S. Department of Housing and Urban Development grant through its HOME program. The projected buyer is a household of four making less than 80% of the $82,700 median income for Kansas City.

The St. John home will include many of the same features of the Indian Mound home, but the students will use prefabricated, preinsulated wall panels to save construction time. The solar power system will be comprised of a dozen small-but-efficient solar panels that the students said will pay for themselves in about 10 years. While larger than the Indian Mound home, Gibson said the St. John studio succeeded in designing it with fewer parts.

COVID-19 put the construction of home components on hold, but a small crew of students completed the prefabricated components in the summer. The project is now slated to be finished in fall 2020 with the help of Stafford County Economic Development interns. The organization will retain ownership of the home and property as a rental because of the rental housing shortage in the county, Dunn said.

“It’s nice knowing that this is going to be built, that it’s going to come to fruition and not just be a project in a portfolio,” said Catherine Gutman, a member of the St. John studio. “This is a house that someone will live in.”

The St. John home may start a building boom. Dunn said Stafford County Economic Development is receiving $500,000 from the Kansas Housing Resource Corporation through the HOME program to build four additional houses in St. John and nearby Hudson. The houses also will be rental properties.

“We really want to complete the K-State house and prove out the estimated costs,” Dunn said. “A big part of what makes the students’ design relevant for addressing the rural housing challenge is being able to construct the homes at a price that is substantially lower than conventional housing design.”

The cost of building the initial homes is being kept low because of the volunteer student and faculty time and some donated materials, including the windows from Interstate Glass Co. in Junction City. Students and faculty in the K-State interior architecture & industrial design and landscape architecture programs assisted by designing the cabinetry and outdoor spaces. Gibson said the intent is for both homes to be duplicated by a general contractor for between $125,000 and $150,000.

“We are working on grant applications that will take this house design and replicate it for what I hope will be a dozen or so rental properties in the next couple of years,” Dunn said. 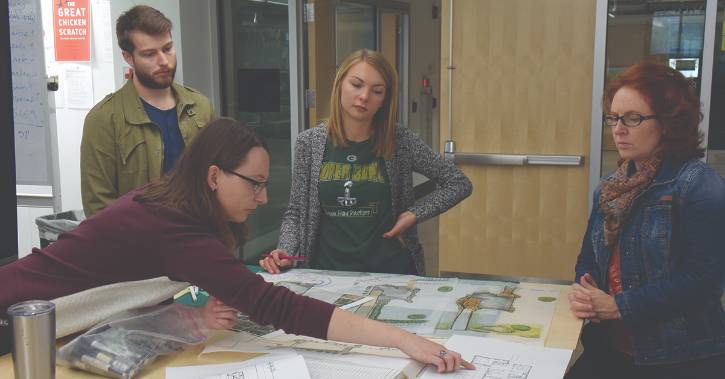 The next assignment for the Net Positive Studio is the 2020 Solar Decathlon, a biennial collegiate competition sponsored by the U.S. Department of Energy. K-State was selected as one of 10 schools to design a super-efficient home that demonstrates next-level technology. A prototype of the home was to be constructed and taken to the National Mall in Washington, D.C., this summer for judging, but the event was canceled because of COVID-19. Gibson said the studio is still competing in the decathlon but under some fluctuating rules and calendar adjustments.

While the national recognition is rewarding, Gibson said having the studio mission realized is the best sign of its Success.

“These projects have been a reminder of how important houses and housing are to the people who live in them,” Gibson said. “This studio’s tireless effort in researching and designing housing is matched by the earnestness and empathy the students show in responding to the real people and problems that are behind the headlines in today’s housing crisis. Every time their designs advanced, I felt more strongly that these aren’t just construction projects; these homes will give back a tremendous amount to the people who will live in them.”

Tiny is big in Nicodemus

A research project by Kansas State University College of Architecture, Planning & Design students has provided a tiny solution to a big housing problem in Nicodemus, Kansas. Residents of Nicodemus, the only continuously settled African American town west of the Mississippi River and a national historic site, have been working to keep their community economically viable since the 1970s.

K-State interior architecture & industrial design and landscape architecture students came up with the solution with their fall 2017 studio project: “The Nicodemus Campus of Small Homes.”

Their plans for a tiny community of tiny homes were based on meeting with Nicodemus residents JohnElla Holmes, a K-State faculty member, and Angela Bates, director of the Nicodemus Historical Society, and learning about community needs and goals. The residents loved the students’ idea and garnered a $120,000 grant from the Dane G. Hansen Foundation to launch the Nicodemus Tiny Homes Project.

Two homes have been built: one is a residence for a retiree and the second is the Cabin, which provides short-term residential living for groups, artists-in-residence and other visitors. Construction of a third home, for a retiree, was put on hold because of COVID-19. To raise funds to build the next four tiny homes, the town sponsored a tiny home giveaway as part of the virtual 142nd Nicodemus Homecoming Emancipation Celebration and the community’s Pioneer Day Festival.

College of Architecture, Planning & Design involvement in Nicodemus has been ongoing for nearly 40 years and has been a focus of La Barbara James Wigfall, associate professor of landscape architecture and regional & community planning, with several award-winning projects.

A team of partners

The following partners, sponsors and students have been invovled in the Indian Mound and St. John projects.