The hemp frontier: Building a statewide network of research pioneers on a new crop

Watch a video about the first year of K-State industrial hemp research.

Using their decades of experience breeding and growing specialty crops, K-State Research and Extension horticulture and agronomy experts are turning their attention to hemp, or Cannabis sativa L., which is one of the more versatile and useful plants in the world.

Until recently, hemp was off limits in the U.S. because it looks, smells and sometimes can become its close cousin, marijuana. The difference between hemp and marijuana is how much tetrahydrocannabinol, or THC, is present. That’s what causes a “high” and keeps marijuana illegal in most states. But industrial hemp can be grown with low to no THC.

The 2014 U.S. Farm Bill opened the door for state agencies and educational institutions to grow hemp for research and, in 2018, the Kansas Legislature passed the Alternative Crop Research Act. Those two steps, along with establishment of ground rules, officially opened a new frontier in Kansas and empowered the Kansas Department of Agriculture, or KDA, as the state’s regulatory agency. 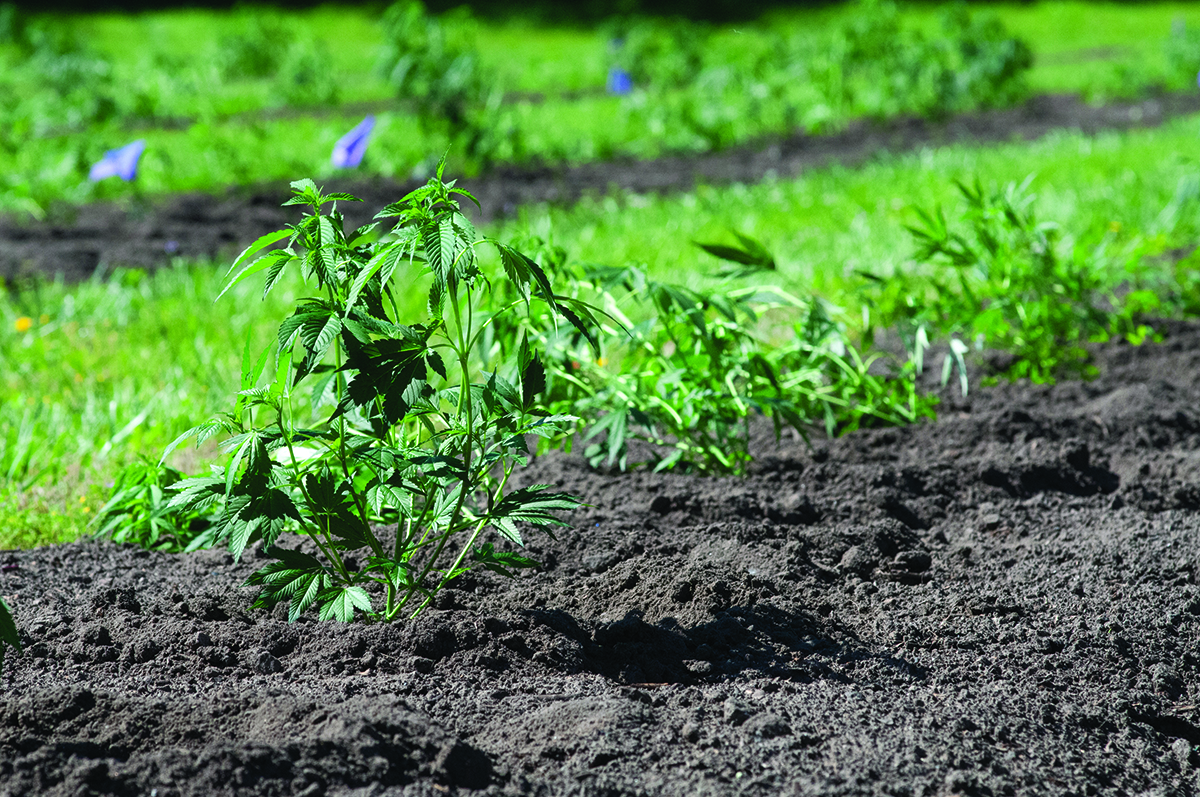 Rather than a gold rush, a green rush began as experimental growers and handlers obtained licenses to grow hemp if they presented a formal research plan and followed strict controls. In the first year of licensure, the KDA issued 254 research program licenses.

A primary control for growers was the requirement that if representative sample tests revealed THC concentrations above 0.3%, then the entire crop must be destroyed.

That’s a significant risk for Kansas farmers already facing a years long economic storm. But some see a risk worth taking because of the interest in hemp products. Industrial hemp can be grown for a variety of options: grain, fiber or both, through dual-purpose production.

“The uses for industrial hemp are almost limited only by the imagination,” said Jason Griffin, director of the John C. Pair Horticultural Center, which is a K-State Research and Extension research center near Wichita.

A newer use for hemp is cannabidiol extract, better known as CBD oil. In recent years, CBD has been touted as a miracle drug by some, but with little to no research backing up those claims.

With so much unverified information, whether it’s CBD product claims or methods for planting, growing and harvesting, the hemp marketplace looks a little like the Wild West. That’s why the K-State research is so important.

“We saw a natural fit for us given our expertise and reputation as a trusted source of properly controlled, unbiased research information,” said Ernie Minton, dean of the K-State College of Agriculture and director of K-State Research and Extension. “Given the diverse climate across the state, we recognized we had the ability to take an initial statewide look at key knowledge gaps relative to how the crop should be grown in Kansas. I think it is natural for us to be leading that effort.”

The call to adventure 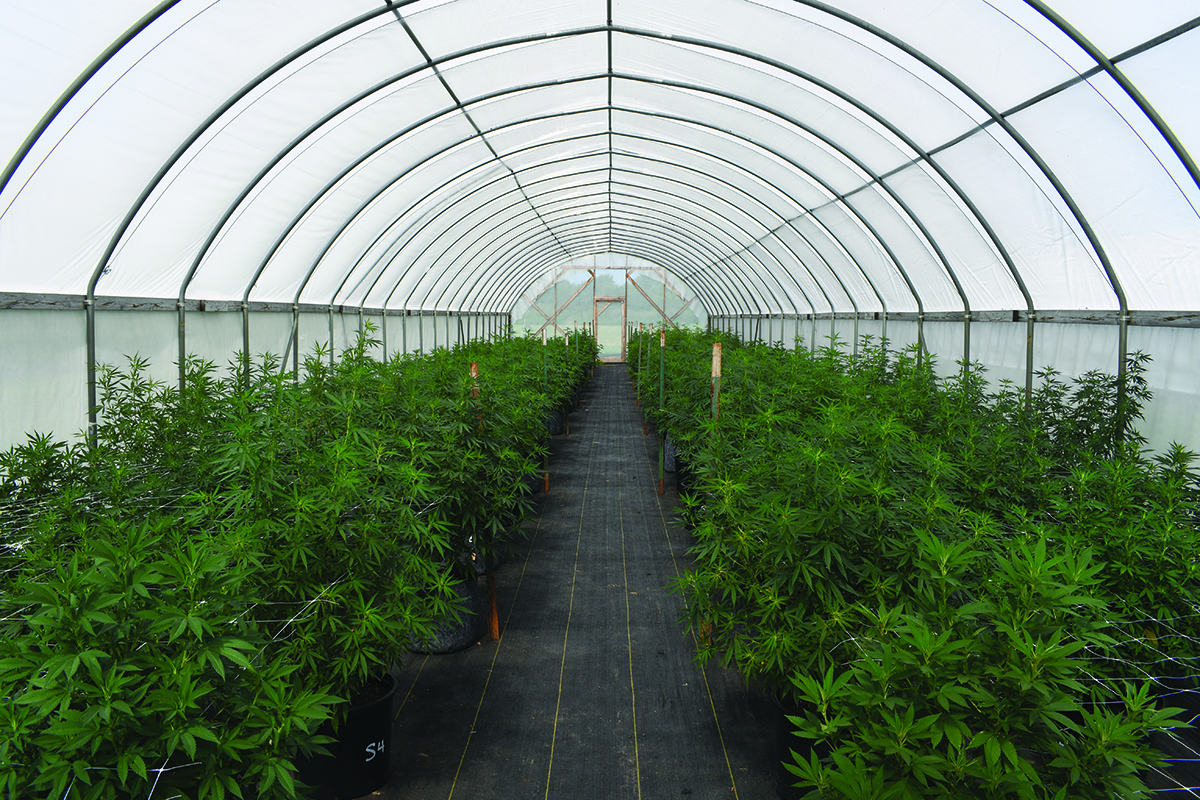 When Minton tapped Griffin as the leader of the K-State Research and Extension hemp team in late 2018, he began an adventure into a world with few experts at all.

Under Griffin’s leadership, K-State is part of a multistate hemp project funded by the U.S. Department of Agriculture. The Pair Center is the primary K-State site for experimental growth of hemp. Significant test plots also were grown in 2019 at the K-State Research and Extension Center-Olathe in the Kansas City metro area and at the Northwest Research-Extension Center in Colby, which provided a much different view of the plant in the drier, higher elevations of western Kansas. Attempts to plant test plots outside of Manhattan were rained out twice.

The same fate nearly befell Griffin’s research at the Pair Center, but a second planting survived. The hemp grew fast over the summer and provided new information for the growers almost every day. Most of the CBD varieties were grown in high tunnels, which are crop shelters similar to greenhouses, while fiber and grain varieties were grown outside with different variables to track.

“We had a couple of varieties that produced very well,” Griffin said. “Kansas producers are very familiar with growing a grain crop, and it looks like we might be able to do this one very well.”

While Griffin saw early promise in the southern part of the state, the other plots also saw first-year success. Cary Rivard, director of the Olathe research center, and Lucas Haag, Northwest area agronomist based in Colby, conducted parallel research in their very different Climates.

Rivard focused solely on CBD hemp and saw his high tunnel plants yield 3.5 times more than expected. In the drier climate of western Kansas, Haag conducted agronomic growth trials for fiber, grain and dual-purpose hemp rather than CBD varieties. Their early assessments indicate that hemp may have a role as a rotational crop. Hemp may be an old crop, but it’s new to universities and the rigors of repeatable, peer-reviewed, controlled Research.

“There’s so much information online, but how much of it is misinformation?” Rivard said. “It’s not malicious misinformation; it’s just not backed up by replication. We’re trying to get away from the hearsay and get into Evidence.”

Haag also cautioned there are plenty of snake oil salespeople blowing into town with only one thing in mind.

“There’s so much money pouring in from the outside,” he said. “In a lot of cases, these are people who don’t have a clue about growing a crop. We’re at ground zero in terms of how to grow this crop. It’s exciting and challenging.” 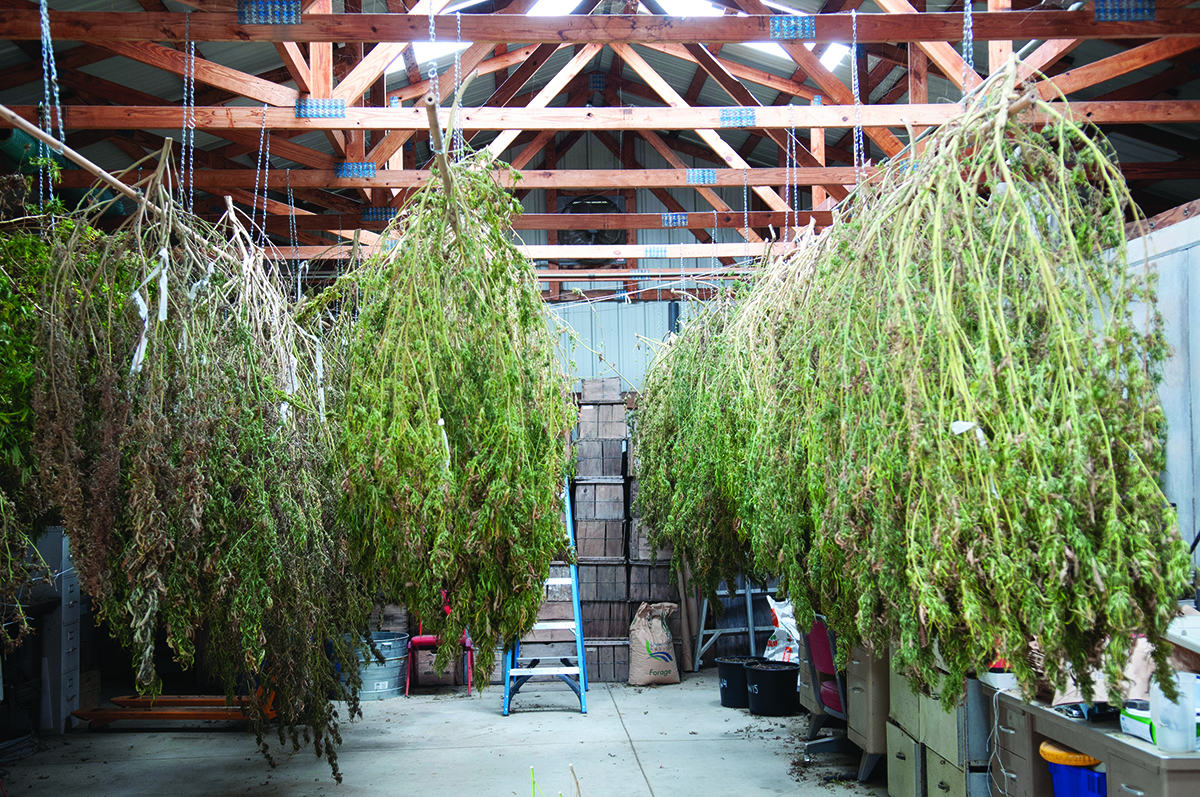 Pliakoni followed the KDA testing procedures and developed a method to screen for five common cannabinoids. She developed a fee-for-service model that enabled her to work with 27 growers who sent her 63 samples from late August through early November, in addition to the 160 samples from K-State test plots. The KDA lab remains the sole resource for official compliance testing, but the K-State Olathe lab helps growers monitor their crops so they know when to harvest before the plants go “hot” with THC concentrations over the legal level.

In the first year, only 10% of the hemp she tested was above the legal level. Pliakoni noted that test results are strictly confidential between her lab and clients.

Because hemp is new and fraught with both possibility and peril, it’s a topic that has captured the attention of the general public.

During the past year, K-State hemp researchers and the KDA hemp team have shared helpful material and teamed up for dozens of outreach events across the state.

Industrial hemp is a legal crop that looks and smells exactly like marijuana, so law enforcement officers need to know about the legalities of transporting hemp. K-State and KDA staff have conducted law enforcement field days at the Pair Center and presented to nearly 100 law enforcement personnel from across the state as well as Kansas Department of Wildlife, Parks and Tourism staff.

“It’s helping them to answer the question, ‘What should I be looking for to ensure that someone is conducting activities that they’re legally allowed to conduct?’” said Braden Hoch, KDA industrial hemp Specialist.

To many law enforcement personnel, the educational sessions are their first opportunity to learn about the crop with details that pertain to their work. The transportation and carrying of hemp is the main point of intersection between farmers and law enforcement, and Kingman County Sheriff Randy Hill said his staff took proactive steps after attending the information sessions.

“The challenge is making sure everybody has the same understanding so we all enforce the law with consistency,” Hill said. “Everybody was impressed with the training and speakers. They did a good job of explaining why this is going on and how the law is applied."

“There is a lot of information out there from people who just really want to share their success stories and tell you what has worked for them,” Griffin said. “That’s great. However, not much of it has been put through the rigors of scientific investigation. If accuracy of information is important to you, that is why you come to K-State.”

Industrial hemp end products range from diapers to denim, flooring to fuel, cardboard to cosmetics, paper to protein powder, and handbags to hempcrete, which is a lightweight building product with excellent insulation properties.

Here are three ways that Kansas State University research is investigating the versatility of hemp.

One team is studying the potential for industrial hemp grain to be used for human food and food ingredients.

The researchers — Donghai Wang, professor of biological and agricultural engineering and the Robert and Becca Reichenberger and Carl and Mary Ice Cornerstone teaching scholar in the Carl R. Ice College of Engineering, and Weiqun “George” Wang, professor of food, nutrition, dietetics and health in the College of Health and Human Sciences — are characterizing physical properties and the chemical composition of hemp. They also are studying nutritional values of hemp seed oil, including protein and carbohydrates.

Industrial hemp has high biomass yields per hectare and high cellulose content, which makes it an ideal feedstock for biofuels.

Donghai Wang and Weiqun “George” Wang also are applying a zero-waste approach to converting hemp biomass, which includes stems and residues, into biofuels and bio-based products.

The research could determine how hemp variety and production location affect the physical properties and chemical composition of hemp seeds.

College of Veterinary Medicine researchers have partnered with Jason Griffin, director of the John C. Pair Horticultural Center, to conduct pharmacokinetic studies to learn how cannabinoids from industrial hemp are absorbed in cattle. Industrial hemp has potential as an economic feed, which would extend the plant material’s usefulness rather than the plant going back to the field or into a landfill.

Michael Kleinhenz, assistant professor of beef production medicine, and Hans Coetzee, department head of anatomy and physiology and interim director of the Nanotechnology Innovation Center of Kansas State and the Institute of Computational Comparative Medicine, finished one trial late in 2019 and have two planned for 2020. They are collecting data to evaluate hemp as a component of cattle feed and the potential ways to mitigate food safety risks.