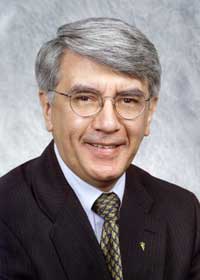 Video of the Lecture

Dr. Alfonso Torres served as Deputy Administrator for Veterinary Services at the USDA's Animal and Plant Health Inspection Service (APHIS) from 1999 to 2002. In that capacity he was the United States Chief Veterinary Officer delegate to the World Organization for Animal health (OIE).

From 1996 to 1999, Dr. Torres was the Director of the Plum Island Animal Disease Center (PIADC) on Plum Island, New York, at the time administered USDA and now under the new Department of Homeland Security. While at PIADC, Dr. Torres served as chief of APHIS Foreign Animal Disease Diagnostic Laboratory (1994-1996). For 3 years before that time, he was Head of the Laboratory's Diagnostic Services section.

He managed the Virology Development Department at SmithKline Beecham Animal Health from 1987 until 1991. Dr. Torres served as an Associate Professor of virology at Cornell University's College of Veterinary Medicine in Ithaca, New York, from 1983 until 1987. He held a similar position at the University of Nebraska from 1978 through 1983. From 1975 until 1978, Dr. Torres served as new Products Manager for the Latin American division of Ames Company. He was also an instructor of veterinary pathology at the National University of Colombia in Bogot Colombia.

The current emergence of severe animal and zoonotic diseases in many parts of the globe are the result of a convergence of factors that include: increased livestock production under poor husbandry and biosecurity practices, expanded international trade and travel, and frequent human and livestock contact with wildlife. These events are exacerbated by weakened veterinary and public health infrastructures. To halt this global health crisis, governments, NGOs, academic institutions and producers must forge novel sustainable partnerships.