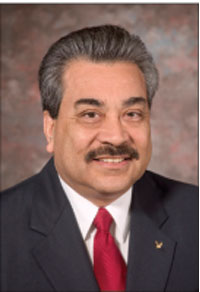 Dr. Rodolfo Arévalo was named the 25th president of Eastern Washington University on January 9, 2006. He began his tenure on April 1, 2006. He comes to Eastern after seven years as provost and vice president for Academic Affairs at The University of Texas-Pan American (UT-PA). In that position, he has been responsible for overall administrative leadership of the internal functioning of academic units within the University. He spent 18 years in the California State University system, as a faculty member, department chair, associate dean, graduate dean and associate vice president. Dr. Arévalo also served as provost and chief academic officer at Fort Hays State University.

At UT-PA, Dr. Arévalo was involved in a collaborative effort for the development of a medical research center, which will be part of a University of Texas Regional Academic Health Center in the Lower Rio Grande Valley.

He took a leadership role in the implementation of a cooperative doctoral degree in pharmacy with The University of Texas-Austin and recently completed a joint library software acquisition project with another University of Texas system campus. He has increased the number of opportunities for students to study abroad by helping increase the number of study abroad sites and developing articulation agreements with more than 25 foreign institutions. Over the past six years as provost at UT-PA, he has initiated a number of programs focused on improving the success of students on campus and improving graduation rates. This included major initiatives in the area of student retention, resulting in the creation of a Writing Center, Writing Across the Curriculum Project, Learning Outcomes Assessment, College Algebra Project, learning Communities Program and the University retention Advisement Program.

Dr. Arévalo actively engaged in external fund raising as chair of a Centennial Capital Campaign at Fort Hays State University and with develpment efforts at California State University, Stanislaus and The University of Texas-Pan American. He has spent more than 16 years participating on United Way campaigns in California and Kansas, working with individual employee donors and corporate leaders.

A native of Edinburg, Texas, Dr. Arévalo is the son of migrant workers who worked in Walla Walla and the Yakima Valley. He is a first-generation college graduate.

He and his wife, Nadine, have five children and three grandchildren. The couple lives at University House on the EWU campus in Cheney.

Dr. Rodolfo Arévalo, president of Eastern Washington University, will discuss the responsibilities, challenges and opportunities universities face in focusing on diversity in a rapidly-changing higher education environment. Drawing upon the depth of his experience as a teacher and administrator at ethnically diverse universities, Dr. Arévalo will outline his vision on how higher education can use its strengths to encourage progress in the realm of diversity.