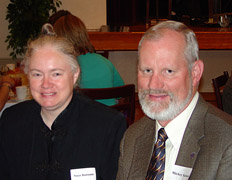 Each year Phi Kappa Phi has the privilege of honoring faculty members who have made outstanding contributions.   We are pleased to present the 2007 Phi Kappa Phi Scholar Award to Dr. Michel D. Ransom.

Dr. Ransom's greatest significant scholarly activity is in the area of teaching. He teaches several courses including Soil Genesis and Classification and Soil Judging. The success of Dr. Ransom's teaching program is shown by the fact that the Kansas State University Soil Judging Team has qualified for the national contest in 12 of the last 13 years.

His research interests include processes of soil genesis and the use of satellite imagery and geographic information systems (GIS) for soil survey. He is the liaison between the Department of Agronomy and the USDA Natural Resources Conservation Service for soil survey activities.

He is Assistant Head for Teaching in the Department of Agronomy. In this capacity, he coordinates academic programs in the department and oversees course-and-curriculum development. He has served on many university committees and was President of the Faculty Senate in 1999-2000.