Movies on the Grass

Movies on the Grass offers the campus and community new films that portray current issues in an informal setting. This film series is now in its fifteenth year. All movies are FREE.

Movies on the Grass

Previous Movies On The Grass

Sept. 17 - The Story of Plastic and panel discussion: "THE STORY OF PLASTIC takes a sweeping look at the man-made crisis of plastic pollution and the worldwide effect it has on the health of our planet and the people who inhabit it. Spanning three continents, the film illustrates the ongoing catastrophe: fields full of garbage, veritable mountains of trash, rivers and seas clogged with waste, and skies choked with the poisonous emissions from plastic production and processing." (From the Story of Plastic website)

Sept. 25 -  Just Mercy: "We believe in the power of story.
Our film Just Mercy, based on the life work of civil rights attorney Bryan Stevenson, is one resource we can humbly offer to those who are interested in learning more about the systemic racism that plagues our society." (From the Just Mercy website) 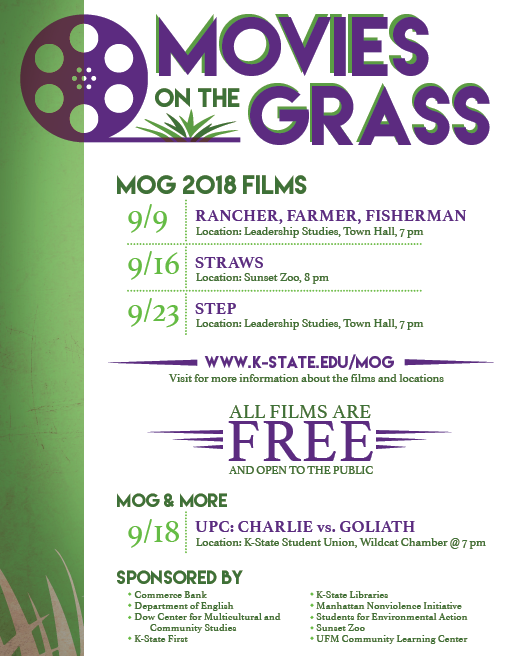 "The film is a tribute to people like Justin Knopf, a fifth-generation Kansas farmer revolutionizing industrial scale agriculture to rebuild the fertility, biodiversity and resilience of his soil, and Dusty Crary, a fourth-generation Montana rancher who forged alliances between cattlemen, federal agencies, hunters and environmental groups to protect the Rocky Mountain Front. Narrated by award-winning journalist Tom Brokaw, the film is based on Miriam Horn's recently released book." (From The Discovery Channel website)

Sept. 16 -  Straws at Sunset Zoo: "With colorful straw history animation narrated by Oscar winner Tim Robbins, STRAWS (30 minutes)leaves audiences with a clear understanding of the problems caused by plastic pollution and empowers individuals to be part of the solution."

"Named one of the "5 Documentaries that will make you rethink single-use plastics." - One Green Planet

“I highly recommend STRAWS as an educational and entertaining film about plastic pollution. It's brisk and engaging storytelling uses humor, fairness, and heart to inspire plastic use changes we all can do...especially no plastic straws!” - Ed Begley Jr , Actor and Environmentalist
(From Straws website)

Sept. 23 - STEP at Leadership Studies: Step is the true-life story of a girls’ high-school step team set against the background of the heart of Baltimore. These young women learn to laugh, love and thrive – on and off the stage – even when the world seems to work against them. Empowered by their teachers, teammates, counselors, coaches and families, they chase their ultimate dreams: to win a step championship and to be accepted into college. This all female school is reshaping the futures of its students’ lives by making it their goal to have every member of their senior class accepted to and graduate from college, many of whom will be the first in their family to do so.
(From Wikipedia.org website)

Sept. 10 - Before The Flood: "From Academy Award®-winning filmmaker Fisher Stevens and Academy Award-winning actor, environmental activist and U.N. Messenger of Peace Leonardo DiCaprio, Before the Flood presents a riveting account of the dramatic changes now occurring around the world due to climate change, as well as the actions we as individuals and as a society can take to prevent the disruption of life on our planet. 'This documentary shows how interconnected the fate of all humanity is — but also the power we all possess as individuals to build a better future for our planet.' says DiCaprio.”
(From Before The Flood website)

Sept. 17 - Don't Tell Anyone (No Le Digas a Nadie): "Since the age of 4, Angy Rivera has lived in the United States with a secret that threatens to upend her life: She is undocumented. Now 24 and facing an uncertain future, Rivera becomes an activist for undocumented youth with a popular advice blog and a YouTube channel. She steps out of the shadows a second time to share her story of sexual abuse, an experience all too common among undocumented women. Don't Tell Anyone follows Rivera's remarkable journey from poverty in rural Colombia to the front page of The New York Times."
(From PBS/POV website)

Sept. 24 at Sunset Zoo - "Souls of the Vermilion Sea: Is a feature length documentary project about the struggle to save the world’s most endangered marine mammal, the Vaquita porpoise." Less than 100 of these threatened porpoises exist due to illegal poaching. Located of the west coast of the Baja Peninsula in Mexico. Groups like Oceana, Sea Shepard and the Mexican government are trying to save this quickly disappearing species.
(From Vaquita Film website)

Sept. 1 - Landfill Harmonic (Sunset Zoo): Children from Paraguay make musical instruments from items in a giant landfill and share their love of music to the world.

Sept. 8 - Electoral Dysfunction: Perfect for the upcoming election, our election comes down to votes cast to the little-known Electoral College.

Sept. 15 - Bag It: Do we need plastic bags? This film shows the negative impact of plastic on this planet.

Sept. 22 - The Visitor: A personal look at immigration and how it affects lives in the big city.

Sept. 3 - Project Wild Thing (at Sunset Zoo): "Filmmaker David Bond is a worried man. His kids' waking hours are dominated by a cacophony of marketing, and a screen dependence threatening to turn them into glassy-eyed zombies. Like city kids everywhere, they spend way too much time indoors - not like it was back in his day. He decides it's time to get back to nature – literally." (From Project Wild Thing website)

Sept. 10 - In Football We Trust: "In Football We Trust captures a snapshot in time amid the rise of the Pacific Islander presence in the NFL. Presenting a new take on the American immigrant story, this feature length documentary transports viewers deep inside the tightly knit Polynesian community in Salt Lake City, Utah. With unprecedented access and shot over a four-year time period, the film intimately portrays four young Polynesian men striving to overcome gang violence and near poverty through American football." (From IFWT website)

Sept. 17 - Ivory Tower: "As tuition rates spiral beyond reach and student loan debt passes $1 trillion (more than credit card debt), IVORY TOWER asks: Is college worth the cost?  From the halls of Harvard, to public colleges in financial crisis, to Silicon Valley, filmmaker Andrew Rossi (PAGE ONE: INSIDE THE NEW YORK TIMES) assembles an urgent portrait of a great American institution at the breaking point." (From Ivory Tower website)

Sept. 24  - Winter's Bone: "Seventeen-year-old Ree Dolly (Jennifer Lawrence) sets out to track down her father, who put their house up for his bail bond and then disappeared. If she fails, Ree and her family will be turned out into the Ozark woods. Challenging her outlaw kin's code of silence and risking her life, Ree hacks through the lies, evasions and threats offered up by her relatives and begins to piece together the truth." Based on the novel by Daniel Woodrell. (From Winter's Bone website)

Sept. 7 - "Plagues and Progress: A Showcase Inspired by 'The Ghost Map'" is a collection of video shorts discussing issues raised by in the 2014-2015 KSBN common read, "The Ghost Map" by Steven Johnson.

Sept. 14 - Electoral Dysfunction: While other films have examined narrow aspects of our electoral system, Electoral Dysfunction is the first documentary project to take an irreverent—but nonpartisan—look at voting in America. The film helps spark national dialogue on the steps ordinary citizens can take to ensure that every vote counts.

Sept. 21 - Girl Rising: Girl Rising journeys around the globe to witness the strength of the human spirit and the power of education to change the world. Viewers get to know nine unforgettable girls living in the developing world: ordinary girls who confront tremendous challenges and overcome nearly impossible odds to pursue their dreams.

Sept. 28 (at Sunset Zoo) - Wings of Life: Narrated by Meryl Streep, this intimate and unprecedented look at butterflies, hummingbirds, bees, bats and flowers is a celebration of life, as a third of the world’s food supply depends on these incredible – and increasingly threatened – creatures.

Oct. 5 (at Town Hall in Leadership Studies) - A Fierce Green Fire: A Fierce Green Fire The Battle for a Living Planet is the first big-picture exploration of the environmental movement – grassroots and global activism spanning fifty years from conservation to climate change.  It brings together all the major parts of environmentalism and connects them. 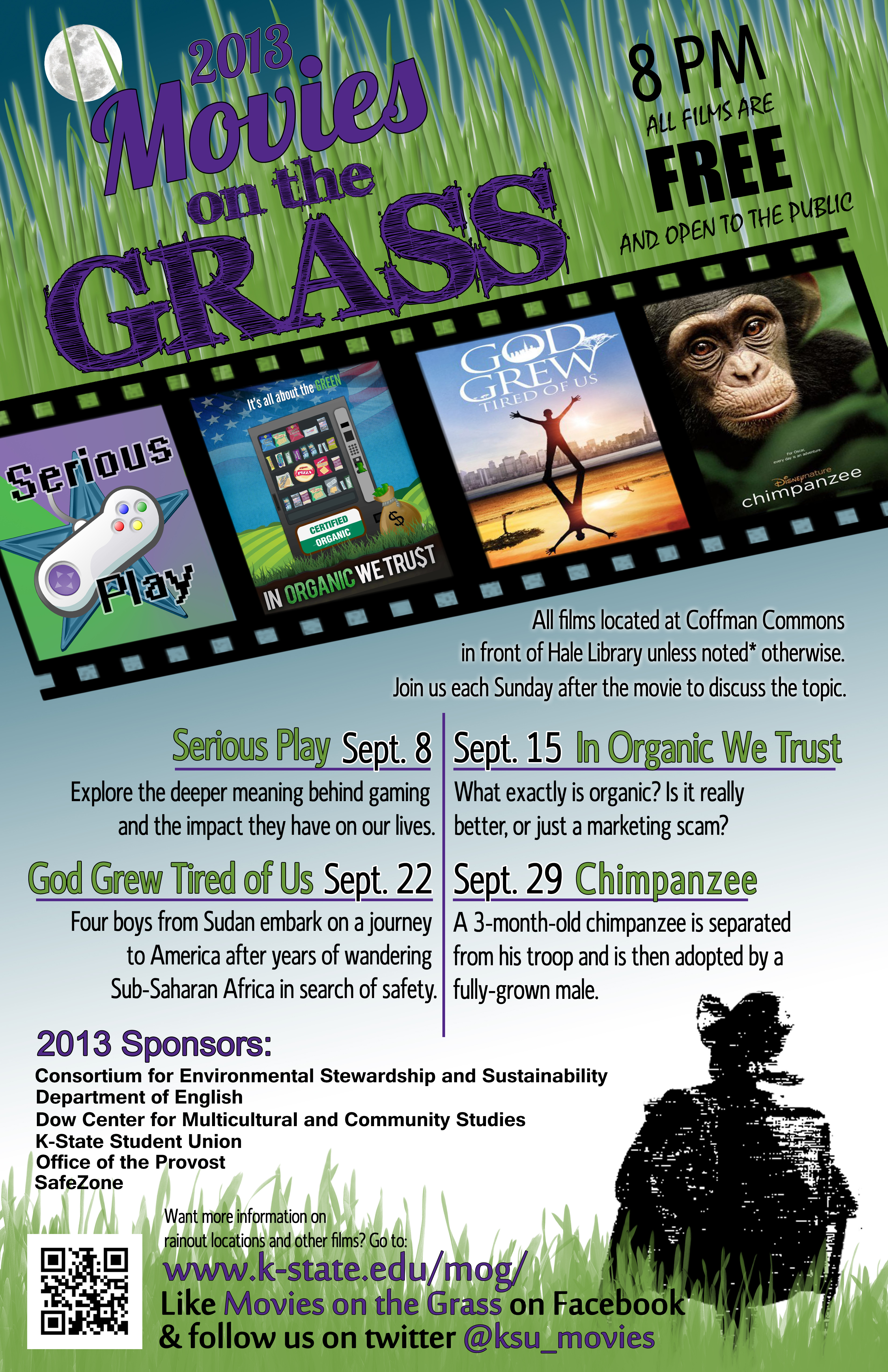 The ninth year of Movies on the Grass and continued to grow and draw fresh audiences.  As in past years, Sunset Zoo was kind enough to host the final film showing.  The 2013 films focused on topics regarding a series of TED lectures and animated shorts exploring gaming (Serious Play), marketing behind organic foods, three “Lost Boys” from the Sudan, and an adorable young chimp named Oscar!  See more information on these movies by visiting the featured movie web sites. 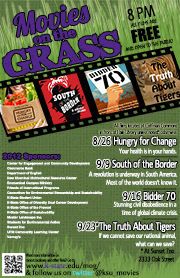 It was Movies on the Grass' eighth year and continued to grow and draw fresh audiences.  As in past years, Sunset Zoo was kind enough to host the final film showing.  The 2012 films touched on topics concerning health, weight loss, environmental activism, endangered species, and much more!  See more information on these movies by visiting the featured movie web sites. 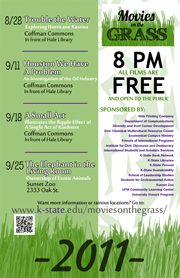 Movies on the Grass in it's seventh year is continuing to grown and spread throughout Kansas State University! This year Sunset Zoo was kind enough once more to host the final showing of the year with The Elephant in the Living Room and its fitting topic of exotic animals as pets. The 2011 set of movies took us inside the topics of Hurricane Katrina, the U.S. Oil industry, and much more. See more information on these movies by visiting the featured movie web sites. 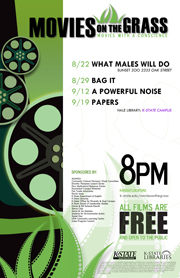 It was the sixth year of Movies on the Grass and it has grown even more than the last! Once again this year Sunset Zoo was generous enough to host our first MOG of the year. The 2010 set of movies tackled subjects from environmental safety to taking on global problems. See more information on these movies by visiting the featured movie web sites. 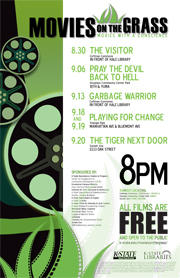 The fifth year for MOG offered a "town and gown" approach, new to the series. Sunset Zoo and the Manhattan Music Coalition offered venues for showing films featuring exotic animal policy issues and street musicians to complement Aggiefest 2009. Douglass Community Center was the site for one film, introduced by K-State's own African Drumming and Dance Troupe! See more information on these movies by visiting the featured movie web sites. 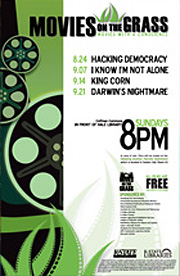 The forth year for MOG! With the big national elections of 2008, we featured the film Hacking Democracy. It was by Michael Franti's I Know I'm Not Alone focusing on peace in the middle-East. King Corn was a hit with 2 college kids planting an acre of Iowa corn. The series culminated with Darwin's Nightmare about the introduction of a commercial fish caused a wide-spread environmental disaster in Africa. See more information on these movies by visiting the featured movie web sites.

Movies on the Grass in its third year. This year Movies on the Grass were especially exciting when we hosted an Electric Car Show and a concert by the Brazilian group AfroReggae on the first two evenings respectively. For more information on these events click on the corresponding links. For more information on the movies, click on the links below to go to each of the films website.

Visit the series announcement in the DowMRC's What's the Haps? blog.

Movies on the Grass makes national news!!! Read the article.

Watch AfroReggae in concert at K-State 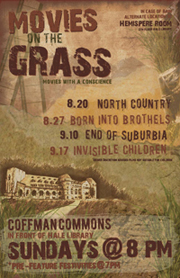 Amnesty International Group 254 was a proud co-sponsor for Movies on the Grass. The movies drew a large audience on every showing for this first innagural year. Movie dates were from September 11 – October 16.