The history of the Military Science Department at Kansas State University dates back to the founding of the University in 1863. One of the provisions of the Morrill Act of 1862 specified that military training be made available to students at land-grant schools, to include Kansas State Agricultural College (KSAC, which later became known as KSU). The Student Army Training Corps (SATC) was organized by the War Department to provide for a supply of reserve officers in time of war. Initially, the War Department could not furnish an instructor and military training was conducted under the supervision of a student with previous military experience. Student-conducted training continued until 1866 when General Ulysses S. Grant detailed Major General J. W. Davidson (with a permanent rank of Lieutenant Colonel in the Calvary) to KSAC as the first Professor of Military Science. 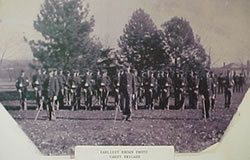 In 1867, enrollment in the Student Army Training Corps (SATC) during the freshman and sophomore years was compulsory at KSAC due to a faculty ruling. In 1868, a two-year course of military instruction was made a requirement for all men. Later, advanced courses were available for junior and senior members. In 1893, students had the choice of either military drill or calisthenics, and drill participation dropped to about half. The Board of Regents made military training mandatory in 1894 for all physically qualified male students below the third academic year. In 1902, the War Department issued General Order Number 94 that established a program of drill and classes. Uniforms were changed at that time to match the West Point Gray uniforms.

The first KSAC man to give his life for his country was Lieutenant J. G. Warswick who was killed on July 22, 1906 in action against Philippine rebels. In 1912, the military department moved from the old Armory building (where Cardwell Hall is now located) to new quarters in Nichols Gymnasium. Cadets built a new rifle range north of the feeding barns and an indoor rifle range in Nichols. Enrollment was over 500 Cadets.

The National Defense Act of 1916 passed by Congress established ROTC, then called the Student Army Training Corps (SATC), renamed ROTC in 1920. By 1917, the Corps had grown so large that they hired their first full time secretary, Mrs. S. P. Winters. There were 431 officers and 1703 enlisted men from KSAC that served overseas in WWI; 48 never returned. The SATC Program initiated at Kansas State University in Spring 1918 was quickly demobilized after the signing of the Armistice in 1918 but reappeared on campus at the beginning of the spring 1919 semester. The entire school was closed for a time in 1919 due to an influenza outbreak on campus which later spread to the 257 Cadets; four (4) died as a result of the epidemic.

From Academics to Battle 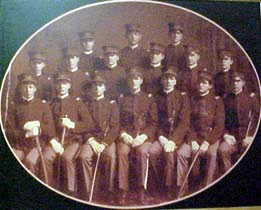 During WWII, the focus shifted from academics to battle as 5,000 students and alumni were called to duty. The KSAC sent 1200 enlisted men and 200 ROTC Officers. There is a memorial in Danforth Chapel on campus remembering the 243 individuals who gave their lives during WWII and the Korean War.

The Military Science Department and Army ROTC moved into its current building in 1943. This was the only building completed on campus during WWII. A senior division of the Air Force ROTC unit was established on May 9th, 1951 and designated Detachment 270 after the Air Force formed from the Army's Air Corps and occupied the same building with Army ROTC. The 1950's saw almost 1900 Cadets enrolled in ROTC (1952) and the end of the uniforms designated "pinks and greens" (1956-57). The next class for Army ROTC switched to the forest green of the new "Pentomic" Army; a catchphrase of the time concerning a recent Army reorganization.

From 1931 to 1965 enrollment was compulsory due to state law. In 1965, the Kansas state legislature repealed this law and the program became elective for all students. The U.S. Congress passed the ROTC Vitalization Act which brought in the two-year program, ROTC Scholarships, and an increase in pay for advanced Cadets. Mandatory enrollment in Army ROTC for freshmen and sophomores was dropped during the 1965-66 school year. Of the Cadets who returned to Kansas State University for the second semester of that school year, eighty-two percent chose Army ROTC. The impact of elective Army ROTC resulted in a steady decline and enrollment decreased from 1,300 Cadets in 1965 to 135 Cadets in 1973.

A disastrous fire gutted the former Military Science quarters, Nichols Hall, in 1968 leaving only the stout masonry walls and twisted steel girders. The University began to employ fire-guards, members of the ROTC programs, who patrolled the campus at night to control suspicious happenings. A consistent problem in the mid 1960's was the harassment of ROTC members.

Almost 780 KSU students served in Vietnam and 42 died or were missing in action. During the Fall of 1973, the Cadet ranks were opened to women for the first time. Twenty (20) women entered the Army ROTC program and became eligible for a commission from the University. During the 1990s, over 300 KSU students were called to duty for Desert Storm and operations in the Balkans and throughout the world. Since September 11, 2001 nearly all of the KSU Army graduates have deployed in support of Operations Enduring Freedom and/or Iraqi Freedom, and one (2nd Lieutenant James Michael Goins) paid the ultimate sacrifice on August 15th, 2004 when he was killed in action in Najaf, Iraq.

Since 1919, KSU Army ROTC has commissioned over 3,800 Second Lieutenants for service in the Regular Army, Army Reserve, or Army National Guard. KSU Army ROTC is one of 41 host programs assigned to the 3rd ROTC Brigade, Great Lakes Naval Base, Illinois and one of 274 host programs in the nation. Today's Wildcat Battalion has steadily grown since 2001 and reached a record enrollment (since becoming an all-volunteer Battalion) in September 2009 with 163 Cadets.