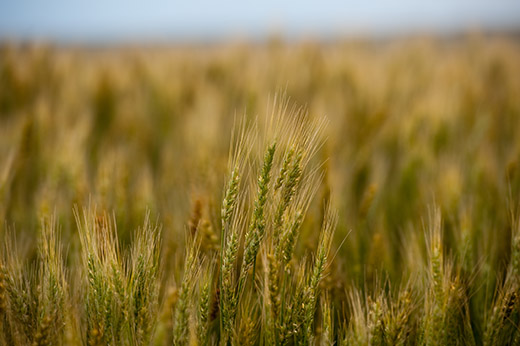 A recent Proceedings of the National Academy of Science study identifies the last major vernalization gene in wheat. The gene, VRN-D4, is found in wheat lines primarily grown in South Asia, particularly northeastern Pakistan and northwestern India. The gene adapted the wheat varieties grown in the region to the local environment. | Download the following photo.

MANHATTAN — A Kansas State University wheat geneticist is part of a breakthrough study that identifies one of the wheat genes that controls response to low temperature exposure, a process called vernalization. Natural variation in vernalization genes defines when the plant begins to flower and is critical for adaptation to different environments.

Researchers anticipate this will help wheat breeders design wheat varieties that can adapt and thrive in changing environments around the world.

Eduard Akhunov, associate professor in the plant pathology department, collaborated with Jorge Dubcovsky at the University of California, Davis on this study. It appears in the Proceedings of the National Academy of Science, or PNAS, article "Identification of the VERNALIZATION 4 gene reveals the origin of spring growth habit in ancient wheats from South Asia."

"The vernalization genes can sense for how long the plant was subjected to low temperature treatment and trigger flowering when the time is right," Akhunov said. "Wheat adapted to different environmental conditions by using different forms of these vernalization genes — the first three of which had been identified by Dr. Dubcovsky's group prior to this study. This is the last major vernalization gene to complete the story."

In the study, researchers investigated a gene called VRN-D4 that is found in wheat lines primarily grown in South Asia, particularly northeastern Pakistan and northwestern India. They showed that the gene likely originated by duplication of a major vernalization gene VRN-A1.

Researchers looked for regions of each plant's genome that showed unusual patterns of variation consistent with past selective breeding acting on the VRN-D4 gene. The team observed that while the VRN-D4 gene is present in wheat varieties grown in different parts of the world, it is most frequent in South Asia.

The researchers concluded it is likely that ancient farmers favored the VRN-D4 variant of the vernalization gene in this region because of its high adaptive value in the local environment.

"A wheat line's adaptation to its local environment is probably one of the most important properties of the plant for wheat breeders because it directly influences crop production," Akhunov said. "If you grow lines of wheat that are not adapted to a specific environment, you will not get a very high yield."

Plant scientists have only recently begun to understand how the vernalization response in plants works, Akhunov said. The latest findings offer new focus points into how these genes and others may be modified to fine-tune a wheat variety for a particular environment, which will result in less crop and food loss due to changing environment.

The U.S. Department of Agriculture and the Howard Hughes Medical Institute funded the study.