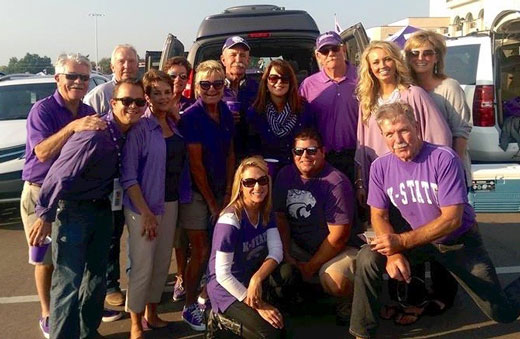 Members of the Beezley family, Kansas State University's 2015 Family of the Year, at Bill Snyder Family Stadium. | Download this photo.

MANHATTAN — Members of the Beezley family travel four hours to Manhattan to attend every Kansas State University home football game, but Saturday, Sept. 19, the family's trip will be extra special. They will be cheering on the Wildcats as the university's the 2015 Family of the Year.

The Beezley family will receive the award as part of Family Day activities Saturday, Sept. 19. The family will be recognized at the football game against Louisiana Tech.

Chimes, the junior honorary, selects the university's Family of the Year based on three criteria: how the family is affiliated with the university; the way family members show their loyalty and pride in Kansas State University; and what role family plays in their lives.

For more than six decades, three generations of the Beezley family have been involved in Kansas State University through athletics, the Blue Key National Honor Society, the university's Greek system, the College of Veterinary Medicine, College of Agriculture departments, the K-State Alumni Association and the Ahearn Fund.

The Beezleys' history at the university began when William "Bill" Beezley pursued a degree in agriculture. He was a graduate of the university's class of 1940 and his sisters, Jeanie, Pat and Dorothy, followed in his footsteps. "Big Bull," as many knew him, married Geraldine "Jerry" Janssen, who also became a passionate Wildcat fan. Together they raised six children and four of them, Ann, Jerome, Pat and Jack, attended Kansas State University.

"From the moment the Chimes selection committee opened the Beezleys' application letter, we could see how passionate they were about K-State — their application was even printed on purple paper," said Hayley Holt, junior in biology, Country Club, Missouri, and Chimes co-chair of events. "They have a tangible passion for K-State and perfectly exemplify all the qualities we look for when selecting the K-State Family of the Year."

One notable tradition in the Beezley family is a Christmas "Wildcat exchange" that replaces the traditional gift exchange with Kansas State University-themed apparel, decor and gadgets.

"Not only did this stand out to me for simply being an amazing family tradition, but the fact that this was an opportunity for them to come together and reminisce about all the fun times they have had being a part of the Wildcat family," Holt said.

"Aside from the personal commitments my family has made to K-State, they also owe much of their success to the university," said Alix Beezley, freshman in open option who nominated her family for the award. "I am looking forward to continuing my family's legacy and history at their beloved university."

The following members of the Beezley family will accept the Family of the Year award on Sept. 19:

From Prairie Village: Molly Beezley Talcott and Curt Talcott with their children, Rachel and Justin; and Brett Beezley and his son, Will Beezley.

"It's an awesome honor for my family to have been selected, they have put so much time and support into K-State over the years, and I can't think of a more deserving family to receive this award," Alix Beezley said.