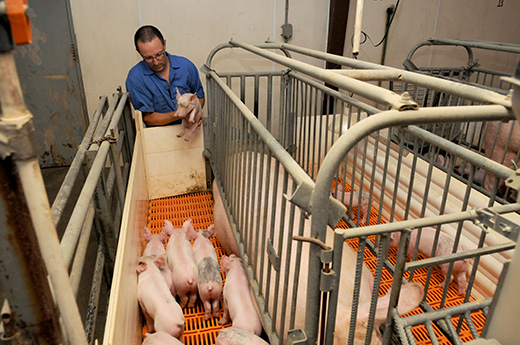 Kansas State University's Jason Woodworth, research associate professor of animal sciences and industry, is part of a research team studying the presence of the deadly porcine epidemic diarrhea virus, known as PEDv, in animal feed and ways to stop transmission of the disease through the feed. | Download this photo.

MANHATTAN — Kansas State University is flexing its research muscle in swine nutrition and grain science in hopes of taking out a deadly virus that is said to have a 100 percent mortality rate in piglets less than 7 days old.

European farmers have dealt with the porcine epidemic diarrhea virus, known as PEDv, since the 1970s, but it wasn't until 2013 that the costly disease was discovered in a U.S. herd. Some estimates indicate that 8 million pigs died due to the virus in 2014. PEDv causes acute diarrhea and dehydration in pigs of all ages. It does not pose a risk to other animal species, and is not a threat to the human food supply.

Kansas State University researchers are studying the presence of the virus in animal feed, work that may help to implement further biosecurity measures and save pigs' lives.

"We have established that feed and feed ingredients may act as a vehicle to transfer the virus," said Jason Woodworth, a research associate professor of animal sciences and industry. "This is extremely important because feed and ingredients are not normally considered a vector in transmitting diseases."

One study found that pelleted feed should be processed to a minimum temperature of 130 degrees Fahrenheit to protect the feed from PEDv. Pelleted feeds are often used in hog operations to improve nutrient digestibility and feed conversion.

"The pellet mill we used in our study is similar to those used in commercial mills," Woodworth said. "By successfully determining an appropriate combination of conditioning time and temperature that can impact PEDv infectivity, we have established a mitigation step that can be implemented quickly in commercial feed production."

"This is the only known bio-safety level 2 facility in the world that can conduct this scale of research utilizing feed processing equipment that is similar to that used in commercial mills," Woodworth said.

Kansas State University's work also included determining the extent of contamination that might occur within a feed mill if a batch of feed tests positive for PEDv. By conducting this research in a secure university facility, commercial mills were not compromised and new guidelines can be applied to the industry.

Additional work includes determining proper sequence of diets to minimize the potential for contamination in feed given to young pigs, and using feed additives that can prevent PEDv infectivity.

"We continue to pursue feed mill biosecurity-focused initiatives because it will not only have benefits for PEDv mitigation, but it also will act to educate our industry about ways to minimize risk of other pathogens that are carried in feed," he said.

Woodworth said that most of this research is funded by the National Pork Board, with support from other industry partners.

Kansas State University scientists are finding new ways to combat the deadly PED virus, which is said to have a 100 percent mortality rate in piglets less than 7 days of old.

"We continue to pursue feed mill biosecurity-focused initiatives because it will not only have benefits for PEDv mitigation, but it will also act to educate our industry about ways to minimize risk of other pathogens that are carried in feed."
— Jason Woodworth, research associate professor of animal sciences and industry at Kansas State University